Ministry of Aviation to engage BA on flights to London

Government says it has engaged the British Airways (BA) authorities to rescind their decision on changes in the London-...
Read more

Morocco has been named as new hosts for the 2022 Africa Women Cup of Nations, the Confederation of African...
Read more

Drake has called for the Grammys to be replaced with a new awards show, after several artists were overlooked in this year’s nominations.

“I think we should stop allowing ourselves to be shocked every year by the disconnect between impactful music and these awards,” said the star.

“This is a great time for somebody to start something new that we can build up over time and pass on to the generations to come.”

The Grammys have yet to respond.

Drake was speaking after The Weeknd was overlooked in Tuesday’s nominations. The star, whose album After Hours is the year’s best-selling record in the US, was widely expected to feature in the album of the year and song of the year categories.

After the shortlist was revealed, the singer, whose real name is Abel Tesfaye, called the ceremony “corrupt”, adding: “You owe me, my fans and the industry transparency”.

In a follow-up tweet, he expressed disbelief that the organisers had asked him to perform despite the snub.

“Collaboratively planning a performance for weeks to not being invited? In my opinion zero nominations = you’re not invited!”

The Grammys responded by saying they “empathised” with his disappointment but that some “deserving” acts miss out every year.

In his Instagram statement, Drake acknowledged that The Weeknd wasn’t the only artist whose contributions had been overlooked, citing acts like Lil Baby and Pop Smoke – who picked up a handful of nominations in the rap categories.

It was time, he said, to “accept that what once was the highest form of recognition may no longer matter to the artists that exist now and the ones that come after”. 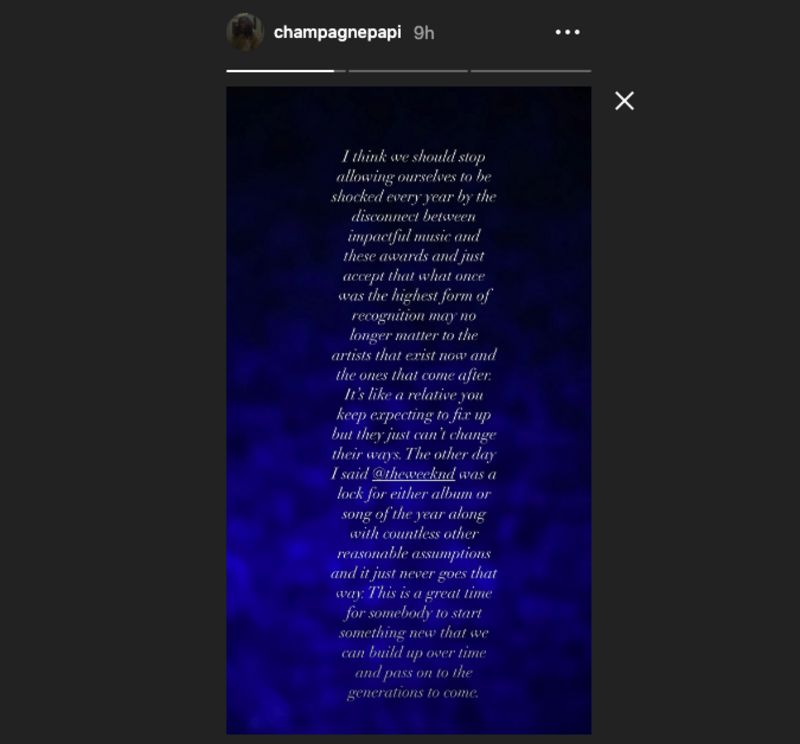 “It’s like a relative you keep expecting to fix up but they just can’t change their ways,” the rapper continued.

“The other day I said The Weeknd was a lock for either Album or Song of the Year along with reasonable assumptions and it just never goes that way.”

Ministry of Aviation to engage BA on flights to London

Government says it has engaged the British Airways (BA) authorities to rescind their decision on changes in the London-...
Read more
Africa

Morocco has been named as new hosts for the 2022 Africa Women Cup of Nations, the Confederation of African Football (CAF) has announced. This was...
Read more
Africa

The Daily Graphic welcomes the partnership between UNESCO, Ghana Education Service and the Ministry of Communications in an effort to eliminate bullying as schools...
Read more

Lawrence Nana Asiamah Hanson, popularly known as ‘Bulldog’, has been granted a GH¢70,000.00 bail with three sureties by an Accra Circuit Court for allegedly...
Read more

A 15-year-old amputee has appealed on social media for a new prosthetic leg that will allow her to dance on the tips of her...
Read more

Stakeholders in Education dialogue ahead of reopening of Schools