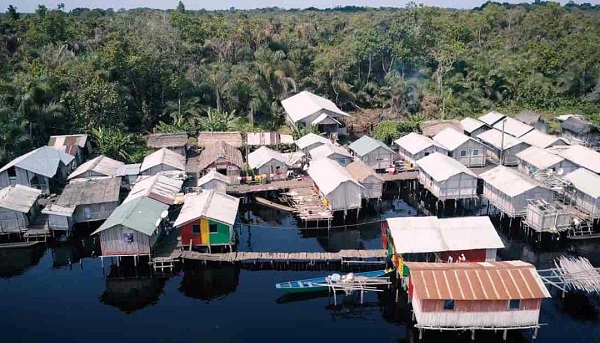 The Chief of Nzulezo in the Jomoro District of the Western Region, Nana Takrika llV has appealed to government to facilitate the dredging of stilt at the canal at Nzulezo, so as to facilitate the carting of goods and movement of the people in the area, thereby contributing to the socio-economic development.

Nana Takrika llV spoke on the GTV Breakfast show on September 20, 2021, where he explained that his people are mainly farmers and access to markets is critical to their livelihoods.

The Chief of Nzulezo, who spoke through an interpreter expressed gratitude to the Ghana Broadcasting Corporation (GBC), for telling the story of Nzulezo to the world, expressing optimism that it would boost tourism and also improve the lives of his people.

On the occasion of Dr. Kwame Nkrumah’s Birthday, (Ghana’s First President), which falls on Tuesday, September 21, Nana Takrika appealed to the People of Nzema land to support the Convention People’s Party, CPP which was founded by Ghana’s First President, so as to participate more actively in the country’s political discourse to propel development.

He described the Nkrumah government as a successful one that needed to be emulated, in terms of development for Ghana.

“Kwame Nkrumah was from Jomoro and he brought massive development, supporting anyone who stands on the ticket of the CPP in order to bring development to us,’’ Nana stated.

Erzoah Nyamekeh, who is a Support Staff of the Nzulezo Stilt Tourism Project acted as translator for Nana Takrika IIV who spoke Nzema. Mr. Nyamekeh told a very detailed history of how the ancestors migrated from Mali, the old Songhai Empire, and made it through a number of terrains before finally settling in the present-day Nzulezo.

Mr. Nyamekeh also spoke of how they were concerned about sanitation issues, and have therefore established the Nzulenzu Community Cleaners, an Association to drive their advocacy on cleanliness, given that their main source of drinking water is the Amazule River, on which they carry out their daily activities.

“We want support from any benevolent organization or individuals, wellington boots, gloves, etc, any support is welcome,’’ he said.

The fighting is over, Time for Peace between Konkombas and Chekosis...

Coronavirus: ‘No-one is safe until everyone is safe,’ – WHO director