The Electoral Commission (EC) will deploy 234,206 permanent and non-permanent officials across the country to perform electoral duties on...
Read more

The afro fusion star Burna Boy gave a powerful performance of “Monsters You Made,” his single with Coldplay’s Chris Martin.

The track highlights the systemic racism and colonial oppression that impact the Black community. 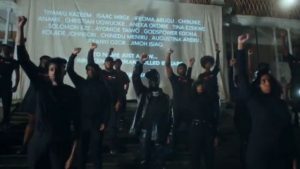 During the performance, Burna Boy called for an end to police brutality and his band wore shirts that read #StopPoliceBrutality.

He also ended the performance by paying tributes to innocent Nigerians killed by SARS.

Watch the full performance below;

A Senior Lecturer and Media Consultant to the Ghana Journalists Association, GJA, Dr. Bonnah Koomson has advised journalists not to be swayed by their...
Read more
Election

President Akufo-Addo has been speaking on recent polls putting him ahead of his main contender in the 2020 elections. Surveys by pollster Ben Ephson, the...
Read more
World

Six people including several doctors have been jailed in China for illegally harvesting organs from accident victims. The group had tricked the families of...
Read more

Drake has called for the Grammys to be replaced with a new awards show, after several artists were overlooked in this year's nominations. "I think...
Read more

The Weeknd has accused the Grammys of being corrupt, after failing to receive any nominations for the 2021 awards. The Canadian star had been expected...
Read more

Nigerian superstar singer Burna Boy has landed his second Grammy nomination with his new album  “Twice As Tall” . Twice As Tall is a 15...
Read more

The Duchess of Sussex, Meghan Markle, has revealed she had a miscarriage in July, writing in an article of feeling "an almost unbearable grief". "I...
Read more