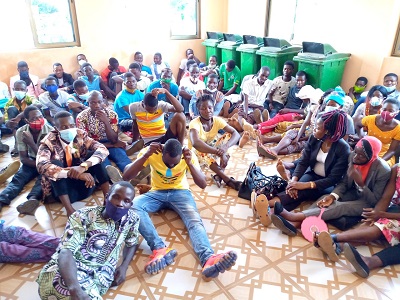 Forty-four Nigerians who have served ninety days in the Tamale prisons are being deported to their country today.

They were convicted of illegal entry into and living in Ghana without permit.

A source at the Ghana Immigration Service told GBC News that the forty four served terms for various offences including illegal entry and living and working in Ghana without the necessary papers.

The source disclosed that, most of the Nigerians were arrested and prosecuted in Navrongo in the Upper East region but were transferred to Tamale to serve their term. The immigration service has been saddled with illegal entry into the country since the closure of borders following the outbreak of covid-19.

The source also noted that, though deportations have become a daily occurrence in the Northern region, this is the first time that they were deporting such a large number.

All the necessary security arrangements have been made to ensure the smooth transfer of the Nigerians to their home Country.

When contacted, the second in command at the Tamale Prisons, Chief Superintendent Ocloo Divine Kwame confirmed the report adding that, there were other West African nationals serving terms at the Tamale prisons for various crimes.