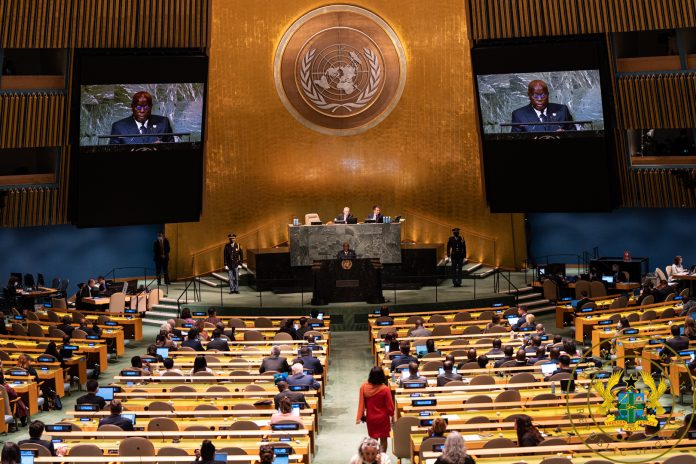 Addressing the 77th annual high-level debate of the United Nations General Assembly, he said the present global economic downturn, which has left many African economies in turmoil, was a pointer that the continent needed a stronger influence on the global economic order.

The high-level General Debates of the UNGA77 opened Tuesday, September 20, 2022 with the theme, “A watershed moment: Transformative solutions to interlocking challenges.” It will end on Monday, September 26.

Reinforcing his point, the President noted that the COVID-19 pandemic, coupled with the Russian war in Ukraine, had seen inflation rates surging a record four times higher in several African countries, including Ghana, making the cost of food very unaffordable, especially for the urban poor.

“Moreover, the spillover from central banks raising interest rates to combat inflation has been severe beyond borders, as global investors pull money out of developing economies to invest in bonds in the developed world.

“This has led to depreciating currencies and increased borrowing costs; meaning we need to raise and spend more of our own currencies to service our foreign debts in US dollars.” President Akufo-Addo pointed out that making matters worse, was credit rating agencies that had been “quick to downgrade economies in Africa, making it harder to service our debts.”

He emphasised that the international financial architecture was skewed significantly against developing and emerging economies like Ghana, saying, “the tag of Africa as an investment risk is little more than, in substance, a self-fulfilling prophecy created by the prejudice of the international money market, which denies us access to cheaper borrowing, pushing us deeper into debts.”

“It has become clear, if ever there was any doubt, that the international financial structure is skewed significantly against developing and emerging economies like Ghana… The avenues that are opened to powerful nations to enable them take measures that would ease pressures on their economies are closed to small nations.

“The financial markets have been set up and operate on rules designed for the benefit of rich and powerful nations, and, during times of crisis, the façade of international co-operation, under which they purport to operate, disappears.

“These are the savage lessons that we have had to take in, as the world emerged from the grip of the coronavirus to energy and food price hikes, and a worldwide rise in the cost of living. The necessity for reform of the system is compelling,” he stressed.

Touching on the theme of the 77th session, President Akufo-Addo stated: “We do not have the luxury of being able to pick and choose which big problem to solve. None of them can wait; the economic turbulence requires urgent and immediate solution; the turmoil and insecurity in many parts of the world require urgent attention; and so does the need to tackle the problems posed by climate change.”

“A watershed moment, indeed, it is, and history will judge us harshly if we do not seize the opportunity to make the changes that will enable us deal with the many problems we face,” he told the gathering.

Many of the speakers at the Assembly focused their debates on the war in Ukraine, the soaring energy and food prices, climate action and ending COVID-19 pandemic.