Phase one of the Sunyani Airport has been completed and is due to be inaugurated. The second Phase which will involve expansion of the terminal and dualisation of the roads leading to the airport will be inaugurated in September this year.

The President, Nana Addo Dankwa Akufo-Addo announced this when he addressed a delegation of Chiefs from Bono Regional House of Chiefs.

President Akufo-Addo noted that feasibility studies on the construction of the Sunyani Sports Stadium have been completed and the Finance Ministry was looking at the estimates of the 45 million-dollar proposed 15,000 seater project.

On the requested road network, President Akufo–Addo, referring to available data in his office, noted that a considerable number of roads are under construction and will be completed. All road projects which have halted, the President assured the delegation, will be revived. 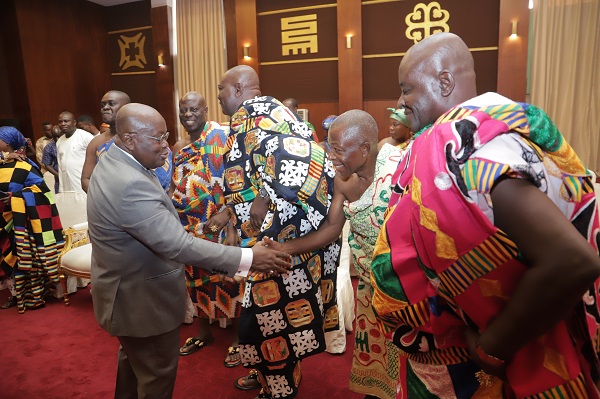 With regard to their request bordering on education and health, the President assured the delegation that the sector Ministers will be informed to take them up and address them appropriately. He again expressed concerns about the rate of Chieftaincy disputes in the country calling on traditional rulers to partner the government to resolve these disputes.

The President said one of the biggest security challenges confronting Ghana is Chieftaincy conflicts and the government spent huge sums of money to manage it.

The Paramount Chief of Dormaa Traditional Area and President of the Bono Regional House of Chiefs, Osagyefo Oseadeyo Agyeman Badu, noted that the people of Bono Region were grateful to government for the introduction of Free SHS and the One-District-One-Factory policies of government. On the construction of the Sunyani Airport, the Paramount Chief commended the President for completing phase one of the Airport.

He also appealed to the President for the completion of some selected roads in the region. He also noted that the people of Bono would be extremely grateful if government will upgrade the Sunyani Regional Hospital to the status of a teaching hospital, as well as ensure the building of much needed infrastructure in the two Universities in the Bono Region, which are the University of Energy and Natural Resources (UENR) and Sunyani Technical University.

In the area of sports, Osagyefo Oseadeyo Agyeman Badu II, noted that the Chiefs and Elders of the Bono Region have made available a huge parcel of land for the construction of the Sunyani Sports Stadium.

Return to constitutional rule or be sanctioned – ECOWAS to Guinea...