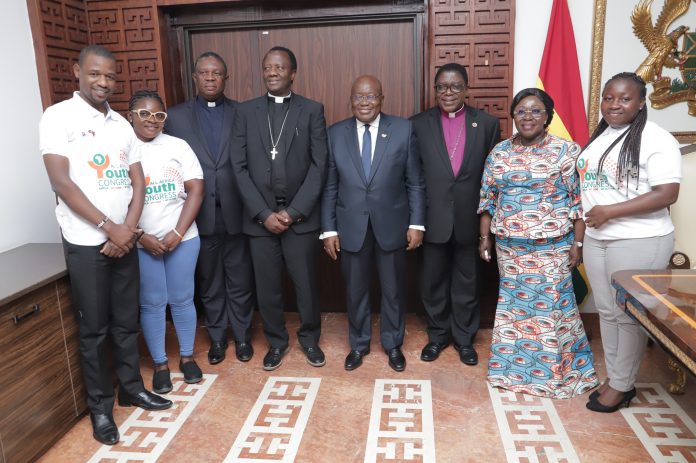 The International Criminal Court (ICC), has denied the accusations that the Court’s suo moto was to investigate and prosecute only persons of African descent.

Its President Piotr Hofmanski said even though the Court’s prosecutions was the case at the beginning, it was “because some African countries had asked the ICC to intervene”.

But currently, he said, the ICC was actively conducting investigations and prosecutions in other parts of the world even though the pending five (5) trials of the Court were cases from the African continent. Piotr Hofmanski who paid a courtesy call on President Akufo-Addo at the Jubilee House on Tuesday, September 27, 2022, said the ICC was currently prosecuting and investigating 16 other cases from all over the world—Africa, South America, Asia, and Europe—over crimes under the jurisdiction of the court.

He assured that the ICC would soon commence trials from other parts of the world apart from those of the African continent.

The landscape of the ICC prosecutions, according to the ICC President, had changed as “we have really become more and more universal, just as it was the aim of the ICC to provide justice for all countries of the world to close up the gap of impunity.”

“And this is exactly what we do,” he stated, adding, “but of course, it is never enough” as the Court needed to do more to galvanise support to build the moral universal situation for other countries to join.

As President of the Court, Piotr Hofmanski said it was one of his priorities to convince and attract other countries to join the ICC in order to engender world peace and security.

In order to achieve this goal, he said it was imperative that the ICC cooperate with countries, not only to convince them to ratify the ICC status but also to domesticate and implement the mechanism of cooperation with the ICC.

That, he said, was the area where Ghana needed to do more, especially with the adaptation of the Rome Statute to ensure that the country’s courts tried perpetrators of genocide, crimes against humanity, and war crimes.

But that, Piotr Hofmanski indicated, was the sovereign decision for the Ghanaian Parliament to make at its own appropriate time.

According to the ICC President, his plea was just to underline how important it was that without the implementation of the status, there was no chance of a well functioning complementary system.

Ghana had been urged by some Civil Society Organizations (CSO’s) to adopt the Bill for the Rome Status of the International Criminal Court to ensure national courts such as Ghana’s try perpetrators of genocide, crimes against humanity, and war crimes.

Ghana accepted a recommendation of the United Nations Human Rights Council in 2012 to domesticate the ICC status in November 2017.

For the Ghanaian Parliament to pass the Bill, it would enable the country’s courts to prosecute perpetrators of the ICC Status crimes as well as transfer cases to the ICC that domestic courts are unable to prosecute.

Ghana had been commended for its original commitment to the ICC, as the second African country to have ratified the international Court, but had been pushed for it to give the Status effect under domestic law.

Piotr Hofmanski underscored the role Ghana played in the ratification of the Status of the ICC  which had not only provided additional funding support for the Court, but also enjoyed political support.

On his part, President Akufo-Addo said the work of the ICC was one of the few areas where there was broad political support in the country.

The President said the country’s Parliament that ratified the Treaty in 1999 was the Parliament dominated at the time by the present opposition and soon after his party, the  New Patriotic Party took office in 2001, he as the then Attorney-General participated in the ceremony that brought the treaty to effect.

He said there was one major advantage in Ghana taken any position on matters to do the Rome Treaty which the country had enjoyed from the beginning, broad national support, and had never become a tool of the country’s domestic politics.

He directed that the Attorney-General took steps  to domesticate the Roman status in other that the country’s courts could try crimes under genocide, crime against humanity, war crimes, as well as transfer cases to the ICC when the need arises.

President Akufo-Addo said though the current Parliament was a hanged one ” we can support it to become a reality.”