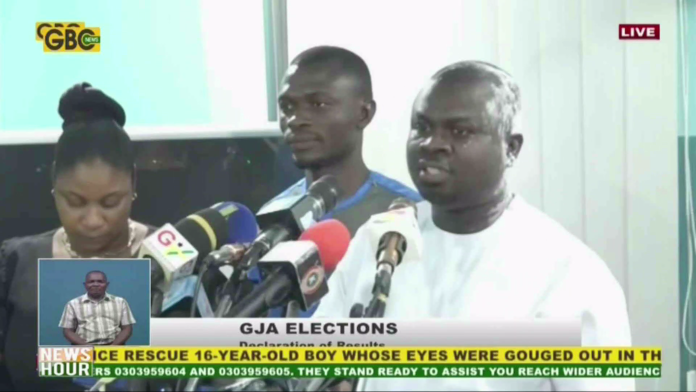 Albert Kwabena Dwumfour has been elected President of the Ghana Journalists Association, GJA after the National and Regional Elections came to an end today, June 24, 2022.

He polled 233 votes to lead Ghana’s Fourth Estate for the next two years beating his contenders Dave Agbenu (142 votes) of Ghanaian Times and Gayheart Mensah (181 votes).

A total of 11 aspirants contested for various national positions with two people contesting for the Vice-Presidential and Treasurer slots unopposed. They are; Linda Asante and Audrey Dekalu.

GBCGhanaOnline’s Editor-In-Chief, Rebecca Ekpe was elected Public Affairs Officer. With the highest vote in the elections, she beat Ceasar Abagali of GNA.

Vice President and Treasurer were retained by Linda Asante of GNA and Audrey Dekalu of GNA respectively as they went unopposed.

Meanwhile, there was a scuffle that nearly resulted in fisticuffs during the counting of  votes for the presidential candidates at the GBC Centre – the largest constituency of the GJA.

This was as a result of concerns raised by a polling agent of one of the presidential candidates over some ballot papers which were thumb printed with the indelible ink.

Some police officers were called in to maintain peace but later the issue was resolved by an official from the Electoral Commission for the counting to resume.