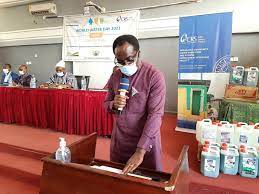 The project seeks to strengthen partnerships between government and the private sector to foster community ownership and sustainability of safe water.

The issue came up at year’s World Water Day celebration at Bolga in the Upper East Region.

The Catholic Relief Services (CRS) has secured an additional six-point-six million US dollars ($6.6m) from the Helmsley Charitable Trust to implement the second phase of the ICOWASH project.

As part of the project component, the WASH infrastructure and behavior change activities in schools, healthcare facilities and communities were being upgraded, with government and private sector intervention and engagement for adoption and up-scaling of the Integrated, Community Water, Sanitation and Hygiene Improvement (ICOWASH).

The Project Manager of WASH, Mr. Chimbar Tom Laari, said the CRS in Ghana had recognized the need to support the Government of Ghana to deliver on its mandate of improving access to safe drinking water in communities and institutions.

He also called for the continuous support of traditional authorities and the people living in CRS operational areas for successful implementation of the project.

It was observed that the implementation of the Integrated Sanitation, Hygiene and Nutrition Education (I-SHINE) project and the ICOWASH project from 2014 to October 2020, had resulted in significant changes in WASH outcomes in beneficiary communities and institutions within the Talensi District in the Upper East Region, and the West Mamprusi Municipality in the North East Region.

There was a quiz competition among some selected basic schools in the region on WASH-related issues to climax the celebration.