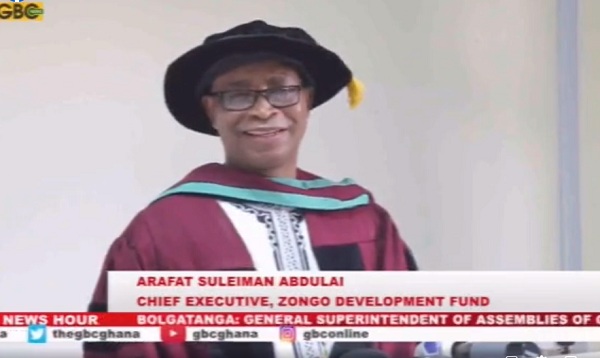 In his efforts to champion the lot of the ordinary Ghanaian especially Zongo dwellers, the efforts of the CEO of the Zongo Development Fund, Arafat Suleiman Abdulai, has been recognised and rewarded.

The Alfred Nobel University in Ukraine has conferred parallel honorary doctorate degrees in Humanities and Science on him for supporting and spearheading policies and programmes towards poverty alleviation in Accra.

In a citation, a representative of the President of the Alfred Nobel university Ukraine, Rev Professor Emeritus Edwin N. Korley said the university has over the years followed the exploit of Mr. Abdulai both in private life and as a government official in pursuing various programmes to change the narrative of Zongo dwellers.

He added that society must applaud such adventures and spur others on to imbibe such tenets to facilitate the smooth progress of society.

The CEO of the Zongo Development Fund, Arafat Suleiman Abdulai, said the award is a testament of the fact that no matter how little an opportunity one is present with, it is incumbent on one to strive to do their utmost best to fulfil their mandates.

He noted that having been called to serve his people in Ghana when he was in a foreign land was a difficult decision to make but he saw it as an opportunity to contribute his quota to the national development effort.

The quest for development in any society is a collective one, and the call is made for all to be actively involved in breaking the cycle of poverty.