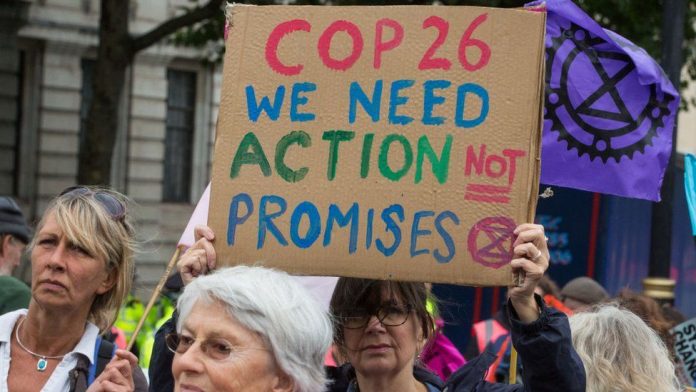 Many African countries, most of whom are classified as “poor” developing nations like Ghana have been on the edge since a BBC report revealed a concerted effort to alter the content of a crucial scientific report on how to tackle climate change. The BBC report which was released barely 2 weeks to COP26 details how nations like Saudi Arabia, Japan and Australia have been lobbying in a grand scheme to get the UN to “play down the need to move rapidly away from fossil fuels” which ” raises questions for the COP26 climate summit in November.”

The report paints a picture, clear enough to convince even the most stubborn minds who do not believe in global warming to begin activism in favour of climate change. As alluded by the BBC, the report shows a number of countries and organisations arguing that the world does not need to reduce the use of fossil fuels as quickly as the current draft as is recommended. It is easy to understand why these arguments are made which is clearly for individual profits with less regard for the environment and climate change.

Despite the ramifications of the report, experts say it was expected. Ghana’s Deputy Director of Nuclear and Alternative Energy at the Ministry of Energy Dr Robert Sogbadzi said “I expected this to happen because countries have stranded access to oil and gas. Oil giants like Saudi Arabia will definitely have a certain position when it comes to transition to clean energy and it’s becoming a political statement than a pure scientific statement so this was expected.”

The BBC report also reveals how some wealthy nations have questioned the rationale behind paying more to poorer states to move to greener technologies.  This particularly concerning as it comes just days before these well-to-do nations will be asked at the summit in Glasgow to make significant commitments to slow down climate change and keep global warming to 1.5 degrees.

It would be recalled that an agreement was struck at the climate conference in Copenhagen in 2009 that developed nations would provide $100bn a year in climate finance for developing countries by 2020, a target that has yet to be met. Reneging on such a commitment provides further insight of how difficult negotiations will be at COP26.

Dr Sogbadzi described the posture taken by these nations with regard to funding as that of irresponsibility.

“Africa is actually not a net emitter of carbon; it is rather the West and developed countries. If you take the UNFCCC agreement, all the projects which are listed in there, most of them are to be financed by the polluting countries as a way to mitigate their emissions so if they say they cannot sponsor it, then it means they are being irresponsible. If you take Ghana for insurance more than 30% of our energy production is clean and that is from the Akosombo (dam) and the rest. So, at COP26 they really have to address that issue. It is to their advantage to make money available to ensure that African countries do not become a net emitter of carbon.”

Coincidentally, Ghana’s Minister of Environment, Science, Technology and Innovation, Dr Kwaku Afriyie had proclaimed that the West African nation would require ” between $9.3bn and $15.5 bn of investment to implement the 47 Nationally Determined Contributions (NDC) measures from 2020-2030. In addition, $3.9 bn will be required to implement the 16 unconditional programmes of action till 2030″ barely 24 hours after the BBC report was published.

All these point to the fact that the difficulties in negotiations at the summit in previous years will go a notch higher during COP26. This was reiterated by the Founder and Managing Director of Climate Tracker Chris Wright during a virtual training seminar for more than 20 journalists reporting in-person and online for COP26. In responding to a journalist from Nigeria (Paul Adepoju) who raised the concern of the difficulties in enforcing climate change agreements, Mr Wright responded with a typically familiar example.

“The challenge of even getting countries to agree on when they do the reporting (of what they are doing to tackle climate change and what their emissions are)and not even what is in the report but when, is very difficult and I think that is something that held up the negotiations between the year 2000 and 2012 when we were stuck on the idea that we needed one model and no one agreed to that”.

Nevertheless, Dr Sogbadzi remains positive of Ghana coming home with some good deals from COP26.
“Looking at the report of the BBC, all the negative comments on funding are coming from fossil emissions like Saudi Arabia and India. Those who really sponsor our programmes like Germany and the EU have not made such comments about intentions to deny sponsorship on climate change so it’s not going to be easy but I will not say it will be extremely tough to get funding for our decarbonisation projects. I am expecting something positive from COP26”

Mr Chris Wright expressed similar expectations.
“I expect this to be the fastest 4 years of climate action ever between last year and 2024 and I would put money on that…. it’s the best time ever to be a climate reporter”

Fuel Station Manager held for failing to account for for than...

'Save yourself from trouble, don’t cane students' – NAGRAT tells members