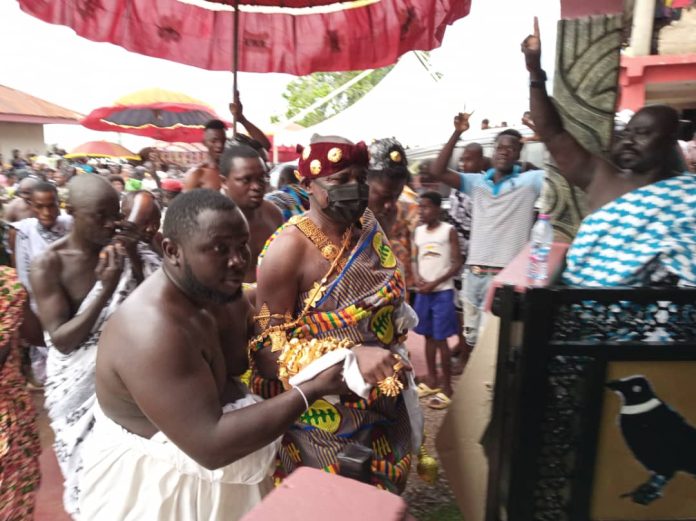 The Ejura Traditional Council has expressed satisfaction with the recommendations of the 3-member Committee set up by the government to investigate recent disturbances that led to recent deaths at Ejura in the Ashanti Region. It has however urged the government to speed up implementation of the recommendations in furtherance of ensuring peace in the Municipality. Ejurahene, Barima Osei Hwedie conveyed these sentiments while addressing a grand durbar at Ejura to climax the 2021 Yam Festival, of the Ejura Municipality in the Ashanti Region, known as the ‘Sekyirene’ Yam Festival. It is an annual festival celebrated to mark the beginning of yam harvesting. Yam, which is among the main crops cultivated in the Municipality, is given prominence by the Chiefs of the various farming communities during the festival. The festival is celebrated amidst drumming and dancing and many important dignitaries are invited to mark the celebration. This year’s celebrations which lasted for two weeks, was climaxed with a grand durbar, which coincided with the 5th Anniversary of the enstoolment of Ejurahene, Barima Osei Hwedie. It was under the theme: “Peaceful Co-existence for Development”, considering the recent unfortunate happenings in the Ejura township. The Ejura Traditional Council therefore used the celebration to further strength the healing process and deepen ties among community members. The durbar was under the distinguished patronage of Asantehene, Otumfuo Osei Tutu, who was represented by the Paramount Chief of Kumawu, Barima Sarfo Tweneboa Kodua. The Member of Parliament for Ejura, Mohammed Bawa admonished the youth to bury their differences and focus on developing the municipality instead of fighting along Party lines. He used the occasion to congratulate the new Municipal Chief Executive Dr. Kingsley Osei for his nomination and subsequent endorsement and pledged to support him unreservedly. He expressed regret that Ejura had over the years witnessed some unpleasant events which he stated had affected development. He emphasized the need for peaceful coexistence among all tribes in the Municipality to enhance socio-economic development.

The Ejura Municipal Chief Executive-elect, Dr. Kingsley Osei assured residents that he will use his influence to lobby the government to ensure that Ejura receives its share of the national cake. The former Chief Executive Officer of Bui Power Authority, Fred Oware, delivered a special message on behalf of the Vice President, Alhaji Dr. Mahamudu Bawumia.