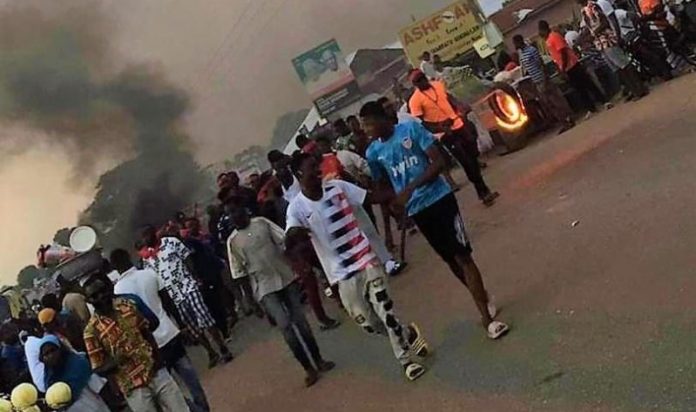 Barima Osei Hwedie II, Chief of Ejura in the Ashanti Region, has appealed to the youth in the area to remain calm in the wake of Tuesday’s shooting incident, which claimed two lives and injured four.

“It is unfortunate we have lost two precious lives, however, it is incumbent on our youth to exercise restraint,” the Chief told the media at Ejura.
Barima Osei Hwedie called on the National Security Council to commission thorough investigations into the issue.
“We are demanding that justice be served in this issue,” he appealed.
The incident was triggered by the death of one Ibrahim Mohammed, alias Kaaka, 45, who was reportedly brutally assaulted, while returning home on a motorbike, on Saturday night, June 26.
He died at the Komfo Anokye Teaching Hospital (KATH) on Monday, where he had been transferred, after being rushed to the Ejura Government Hospital.
A statement issued by the Ashanti Regional Police Command, and copied to the Ghana News Agency (GNA) in Kumasi, said two suspects, Ibrahim Issaka, alias Anyaas, and Fuseini Alhassan, had been arrested in connection with the murder of Kaaka.
The deceased has since been buried in line with Islamic tradition.
What was intended to be a peaceful demonstration, following the burial of Kaaka’s mortal remains, turned violent as some of the aggrieved youth decided to vent their spleen on anything on sight.
In the ensuing mayhem, a military/police combined team detailed to maintain order reportedly shot to disperse the crowd, resulting in the death of the two.
Four other persons who sustained gunshot wounds are currently on admission at the hospital.