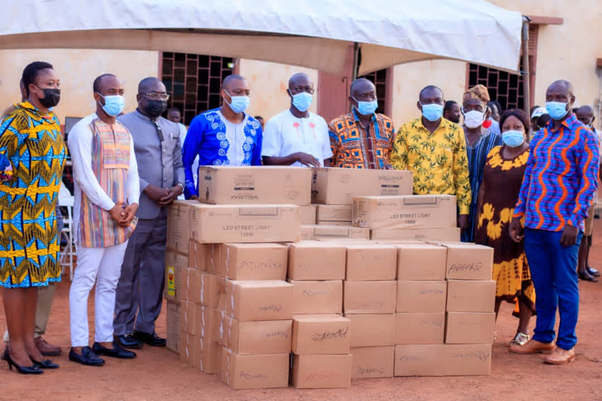 Dr Kingsley Nyarko, Member of Parliament (MP) for Kwadaso, has urged Assembly members in the constituency to establish neighbourhood watchdog committees to support the police to fight crime.

He said although police stations could be found in the areas, neighbourhood watchdog committees would complement the efforts of the police to reduce the rate of robbery in the constituency.

Speaking at separate town hall meetings at Kwadaso and Nsiah Asare, communities in the constituency, Dr Nyarko said peace, law and order were key in building their communities.

The meeting, the sixth in the series, was to afford the MP and the MCE, Mr Richard Agyenim Boateng, the opportunity to learn at first hand the challenges facing the residents and how best they could help to resolve them.

Dr Nyarko said the town hall meetings were instituted to provide the residents with the platform to discuss the development of their communities and suggest means to address them.

He took the opportunity to thank the people for voting for the NPP and to lead them in parliament.

Dr Nyarko appealed to the people to alert the police on any suspicious activities in the area for prompt action.

The MP said it was important for the community members to decide the projects, which were of priority to them, for consideration and implementation and appealed to the residents to unite to help develop the community to better their living conditions.

Dr Nyarko assured the residents that he and the MCE would work together to beef up the security in the community and presented hand sanitisers, nose marks and 20 pieces of 150W LED streetlight bulbs to the Assembly Members to fix in their communities.

Mr Richmond Agyenim Boateng, on his part, pledged to do everything in his power to beef up the security system in the municipality.

He appealed to the people to rally behind the Assembly and the MP, to help bring development into the two communities.

Mr Agyenim Boateng added that the Assembly was going to build an Abattoir at sofoline.

Madam Grace Billi Kampitib, Municipal Director of Health Services, advised the people to continue to adhere to the safety protocols to help prevent them from getting infected with the coronavirus.

She said currently the Municipality had recorded two COVID-19 active cases and pledged that the health directorate would do everything possible to provide quality healthcare services to the people.

The Assembly Members for the two areas, Mr Samuel Kwaku Gyasi and Mr Ernest Kwabena Frimpong praised the MP for engaging residents to know the challenges facing them and finding the best ways that could be used to resolve them.

EU to commit additional 4.5 billion euros worth of investment in...