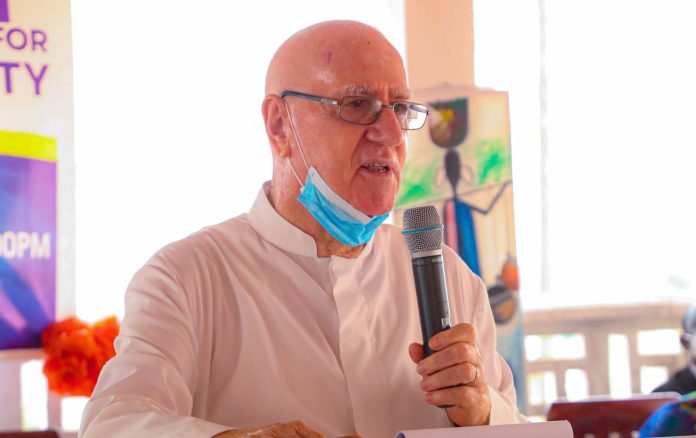 By Jacob Aggrey and Ransford Debrah

The Vice President Dr. Mahamudu Bawumiah has launched a foundation in honour of revered Catholic Priest and Founder of the Lepers Aid Commission, Rev. Father Andrew Campbell, in Accra. Christened, ‘the Father Andrew Campbell Foundation’, it is aimed at supporting the needy and the handicapped with food, medical supplies and other basic necessities of life.

Speaking at the launch, the Vice President commended the Catholic Church for establishing the foundation to support the marginalized in society.

He said Rev. Father Andrew Campbell is a man who has given his all to society and Ghana, and ”establishing a foundation in his honour at this time, is in the right direction”.

Father Campbell has been instrumental in the redevelopment project at the Weija Leprosarium, laboratory for Leprosy conditions at Wa and the leprosy Clinic at Kokofu.

He is the brain behind the Christ the king Soup kitchen which serves hot meals a day to street children.

Vice President Bawumiah called for support for the Foundation.

Rev. Father Andrew Campbell said his Foundation will work to lift the deprived in society.

He called on all to come on board to give the Foundation the needed backing to support vulnerable persons in society.

Rev. Father Andrew Campbell, who is originally from Ireland first arrived in Ghana in October 1971 as a Catholic Priest and has since served the Catholic Church in Ghana, for more than five decades until his retirement in 2022.

A Book collated by Father Campbell and friends was also launched to raise funds for the Foundation.