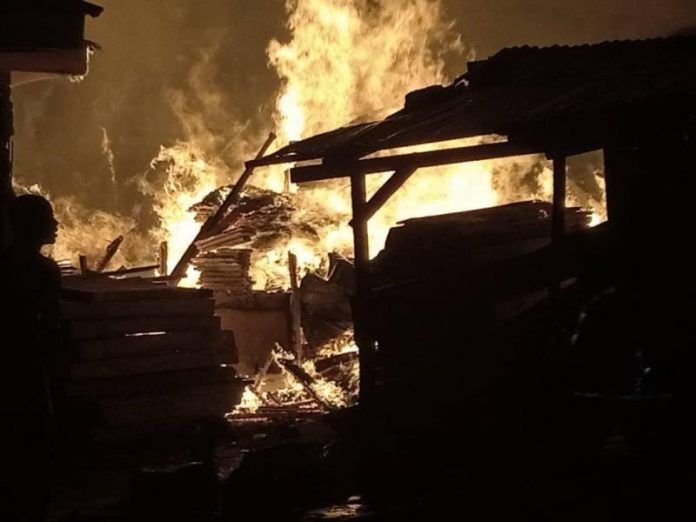 Property estimated to run into thousands of Ghana cedis was lost on Tuesday, August 24, 2021, when fire gutted a number of wooden structures at Achimota Neoplan in Accra. Eyewitnesses told GBC News that the blaze started in a chamber and hall kiosk adjacent to a Bank on the Achimota Highway, which served as a residence.

Though they called the fire service for help, the wooden structures proved little match for the flames.

When disaster struck around 3.30pm on Tuesday afternoon at the Achimota Neoplan area, neighbours, street hawkers and passersby all put their shoulders to the wheel to bring the blaze under control. But try as they did, it was not enough to stop the fire from spreading from the chamber and hall structure to the others nearby.

Some neighbours whose kiosks were in the way started removing their belongings from their rooms to safety. When the personnel from the Ghana National Fire Service arrived a few minutes later, they took control of the situation and managed to stop the flames.

A number of structures were lost including what we are told was a beauty salon and a carpenters’ shop. Mr Isaac Cofie owned the carpentry shop while Madam Ama Dumfeh owned the salon. With no insurance to cover such accidents, they both lost everything to the flames.

Mr. Isaac Obuobi, a station officer 1 from the Abelenkpe Fire Station, was one of the men who brought the fire under control, as investigations commenced into what may have happened.

While some heaved a sigh of relief that the fire did not engulf their homes or source of livelihood, others are only now beginning to count the losses. But they must find new living accommodations first for the night before thinking of how to pick up the pieces from the ashes to start all over again.

Pokuase Interchange to be opened to traffic by end of November

Instagram to hide likes – Here’s Reactions from celebrities and users