Ghana and South Africa have pledged to improve Intra-African Trade which now stands at 16%, a development described as too low for a population of 1.3 billion people.

President Akufo-Addo and his South African counterpart, Cyril Ramaphosa, made the pledge at the Second Ghana-South Africa Business Forum in Accra. The two leaders have therefore started moves to take a leading role to develop the African Continental Free Trade Area, AfCFTA, for the continent’s rapid economic transformation. 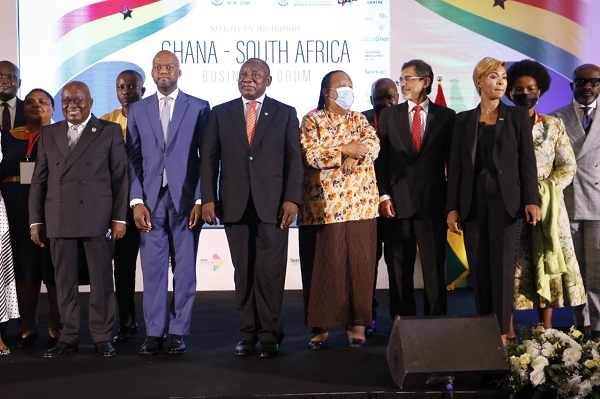 Bright Ntramah reports that Economic relations between Ghana and South Africa have been growing steadily over the years. This relationship has seen more than two hundred South African companies operating in Ghana and offering jobs to over twenty thousand Ghanaians.

Over the past ten years, South African companies have undertaken more than 170 projects valued in excess of one point four billion dollars.

The Ghana South Africa Business Forum has therefore become a vehicle to facilitate trade and investment between the two countries. According to statistics, Africa contributes only three percent to global trade, which is deemed too small for the global economy.

President Akufo-Addo said the 16 percent of Intra-African Trade is not the best.

The two leaders have agreed to scale up cooperation with the objective of working together to advance the AfCTA for Africa’s transformation.

Black Queens arrive in Niarobi ahead of Kenya clash

Ghana re-elected on UNESCO Executive Board