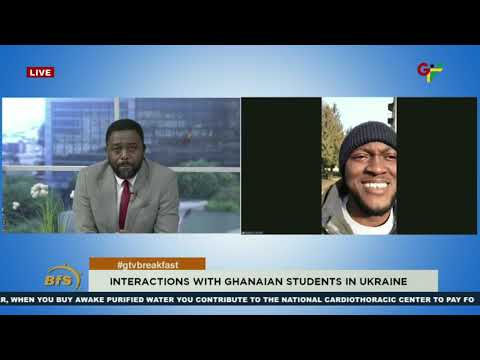 Ghanaian students in Ukraine are calling on the Ghanaian government to find a way to evacuate them. This comes amid tensions between Ukraine and Russia.  They say it is no longer safe as tensions escalate. In an interview with one of the students Joseph Yankson on the GTV Breakfast Show, he said some countries have started making plans of evacuating their people. He added that airports are blocked and Ghana does not have any Embassy in Ukraine to run to, in this crisis hence the need for the government to fast track things to get them out of the country. He spoke to Kafui Dey.

”I haven’t seen anything on our WhatsApp platform yet. But we were asked to print forms previously and we have not heard from them since we are hoping the pulling back of troops and then peace comes in so peace can prevail that is our prayer”, the student said.

In the message to Ghanaian authorities listening and watching right now?, Joseph Yankson had this to say.

”We are pleading to them that they should contact us and find a way to come and pick us from this country”.

The students say they have been told to stock up on pantry food as the lights would go out by 3pm local time.

Meanwhile, BBC reports that the Russian President Vladimir Putin has announced a “military operation” in Ukraine’s Donbas region. He made the declaration in a televised speech at the same time as the UN Security Council was imploring him to stop. Putin said clashes between Ukrainian and Russian forces are “inevitable” and “only a question of time”. Meanwhile the UN’s Undersecretary had warned that a military escalation would lead to “an unacceptably high cost, human suffering and destruction” but Putin also says “justice and truth” are on the Russian side, warning that Moscow’s response will be “instant” if anyone tries to take on Russia. The Russian President added that his country’s actions are self-defense and tells Ukraine’s military, their fathers and grandfathers did not fight so they could help neo-Nazis. Ukraine’s President Volodymyr Zelensky has however warned that Russia could start “a major war in Europe” any day now, and called on Russians to oppose it. In a late-night address, he said he had unsuccessfully sought talks with Russian President Vladimir Putin.

Putin said Russia had almost two hundred thousand troops and thousands of combat vehicles on Ukraine’s borders. And switching from Ukrainian into Russian, Mr. Zelensky made an emotional appeal to Russians to reject an attack, saying they were being lied to about Ukraine. He added that his country is ready for a Russian attack, vowing that if they try to take their country and freedom, they will be defending themselves. It comes as Russian troops are reportedly edging closer into Ukraine’s two rebel-held regions.

Meanwhile, US President Joe Biden has responded to what he calls an “unprovoked and unjustified attack by Russian military forces”. He says “the prayers of the entire world are with the people of Ukraine” saying he will be monitoring the situation from the White House and will meet with G7 leaders later today before announcing “further consequences” for Russia. Biden says there will be a “strong, united response” from NATO allies that deters any aggression against its members.

Russia has attacked Ukraine by land, air and sea. Military vehicles have entered the country from many directions, with cruise and ballistic missiles striking the military headquarters and airports. Russian troops are reported to have landed in the Ports cities of Odessa and Mariupol. Ukrainian officials say at least 40 of its soldiers and a dozen civilians have been killed while about 50 Russian fighters, have been killed. There is no independent confirmation of the figures. Moscow said pro-Russian gunmen in eastern Ukraine, have carried out a counter attack with supporting fire from Russia. Earlier, President Vladimir Putin, threatened that any interference would lead to an immediate response never previously experienced in history. The Ukrainian President Volodymyr Zelensky, condemned Russia’s attack as treacherous, likening it to the invasion by Nazi German Forces in the Second World War. He said President Putin, has started a war with the whole democratic world. President Zelensky said Ukraine and Russia are on different sides of World history and his country’s Armed Forces are repelling the Russian attacks. He claimed that invading Russian Forces have sustained heavy losses. 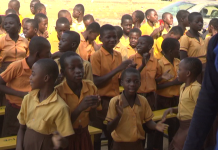