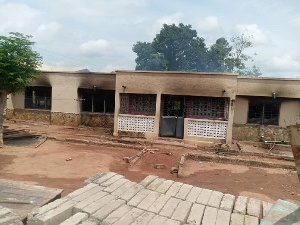 Some irate Zongo Youth in Wenchi in the Bono Region yesterday burnt the residence and washing bay of a Businessman who is also a Sub-Chief, Nana Ameyaw over suspicion of masterminding the killing of one Adamu Wahab, popularly known as Adamu Soldier.

55-year-old Adamu Wahab, a Taskforce member and farmer in Wenchi, was found dead on his farm on Monday.

The Wenchi Municipal Police Commander, Deputy Superintendent of Police, Eric Awudzivi, at a media briefing, said Nana Ameyaw and one John Kofi Dokyi have been arrested as key suspects in the case.

Briefing the media on the issue, the Wenchi Municipal Police Commander, DSP Eric Awudzivi said, the deceased popularly known as Adamu Soldier was said to have left home on Monday to visit his farm but did not return.

His wife consequently informed the head of the family and a search party was organized which eventually discovered the lifeless body of Adamu in a river called Yooyoo near his farm.

The family suspected foul play since the deceased was embroiled in a land dispute with Nana Ameyaw and John Kofi Dekyi.

The Wenchi Police Commander said they have picked up the two suspects to assist them in investigations into the death of Adamu Soldier.

A third suspect, Alhassan Usman Opoku is however on the run. DSP Awudzivi called on Alhassan to report to the Police to assist in investigations.

DSP Awudzivi said the security agencies would not relent in their efforts to bring the perpetrators to book.

The two suspects have since been transferred to Sunyani. In a related development, the Wenchi Municipal Chief Executive, Dr. Prince Kwakye Afriyie has commended the leadership of the Islamic community and the chiefs of Wenchi Zongo for calming tempers.

He assured the family that the Police will do their best to bring the perpetrators of the heinous crime killing to book.

He also said, therefore, said police will soon come after those who set ablaze the residence and washing bay of the businessman.

YEA does not give outright employment – Awal Mohammed