The Juvenile Court in Accra has convicted a final-year student of the Nungua Krowor 2 Junior High School who assaulted a teacher to a fine of ₵1,800.

The JHS student was found guilty by the court for assaulting the teacher who punished him for failure to do his homework on February 22, 2021.

The Juvenile Offender who denied conspiring with 15 other men to assault the teacher, was found guilty after the trial. The court said he would serve a 3-month jail term if he defaults in the payment of the fine.

The prosecution told the court that the accused person refused to do his homework and after he was punished, he dashed home to call 15 other young men who allegedly stormed the school in a Sprinter Bus and attacked the teacher, inflicting wounds on his face.

The teacher, Moses Onyameasem, was rescued by his colleagues and rushed to the LEKMA Hospital in the Greater Accra Region, where he was treated and discharged.

After the attack, the mother of the pupil was also alleged to have gone to the school and verbally assaulted the teacher, adding that the development led to the closure of the School and a joint stakeholder meeting was held over the incident. 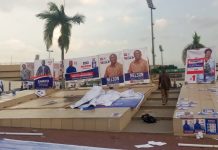 Man lives with metal spoon stuck in his oesophagus for a...

Markets in Ho to be closed on ‘market days’