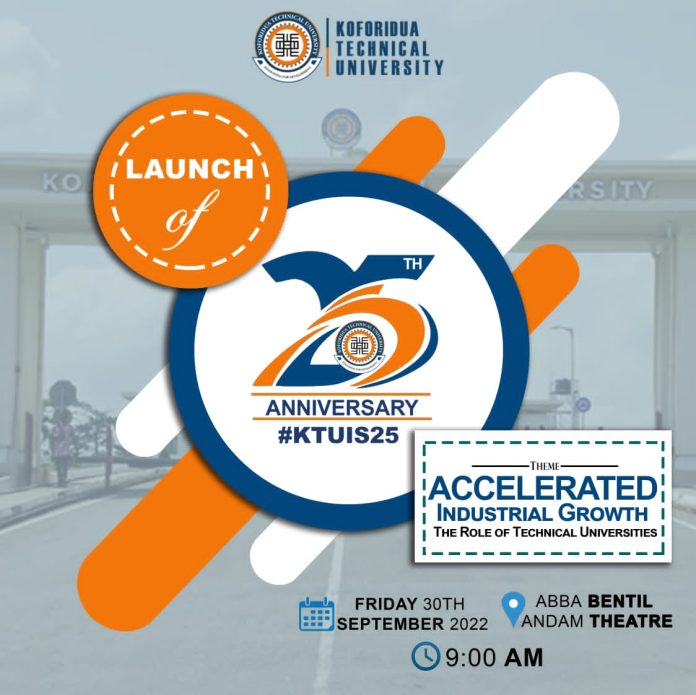 The Koforidua Technical University, KTU has launched its 25th Anniversary in the Eastern region with a call on tertiary institutions to produce graduates with requisite skills by the job market.

The Deputy Director of Plans at the Department of Plans, Research and Development of the Ghana Armed Forces, Lt. Colonel Anthony Amoako made the call while speaking on the theme “Accelerated Industrial Growth, the Role of Technical Universities”. He noted that most academic institutions in Ghana are ”busily producing graduates who are ill-suited for the labour market and lack entrepreneurial skills that will enable them create jobs after school”, and that is a problem.

Speaking from the perspective of an old student of KTU, Lt. Colonel Amoako said, ”there is therefore the need to equip graduates with requisite skills and competencies to enable them to think outside the box to be self-employed after school”.

The Vice Chancellor of KTU, Professor David Kofi Essumang said the statutory goal for the establishment of the school 25 years ago by the government was to provide hands-on, practical and entrepreneurial graduates to meet the needs of various sectors of the labour market.

He noted that the University which began with one block structure can boast of more than eight thousand students.

The 25th Anniversary celebration will involve activities such as media and Community engagements in October, Leadership lectures and workshops in November, TVET and STEM festival in January, Alumni Homecoming and SRC week in February with the grand Anniversary durbar in March 2023.

The Anniversary cloth was also unveiled amidst a fashion show.

The Koforidua Technical University, KTU, formerly Koforidua Polytechnic was established in March 1997 in pursuance of the policy of the government that the Polytechnic should offer tertiary education to train middle-level manpower.

The University has since been committed to its mandate, by providing professional, technical and vocational education courses aimed at producing graduates with great job prospects.