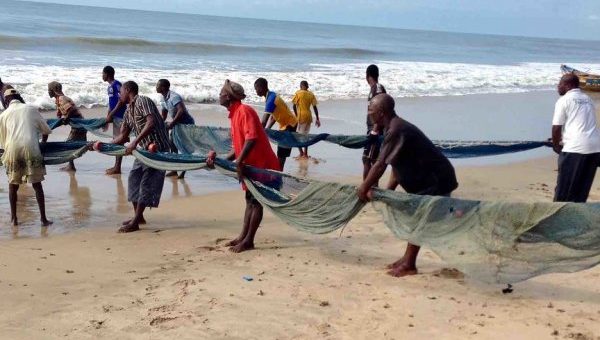 The Ministry of Fisheries and Aquaculture and the Fisheries Commission has been urged to make the fisher folk man the Centre of fish management to ensure a sustainable fishing sector.

Mr. Richster Nii Amarh Amarfio, a Fisheries Advocate making the call, said there was the need to make the fisher folk the Centre of fish management as that was the only way fishers would cooperate with regulators.

Mr. Amarfio was speaking on trawl fishing on the Ghana News Agency – Tema Industrial BoardRoom Dialogue platform, which was aimed at creating the needed opportunity for state, non-state, industry players and other stakeholders to address topical national issues.

He said, “without making the fisherman the Centre of fish management, no matter what you do if they are ignorant or mischievous it won’t work”.

He added that fisheries management was about human management saying, “we manage the human being to know that you don’t catch juvenile fish or those that are reproducing”.

He indicated that if the fishers were properly educated and developed to know why they should not catch small fish; they would support the authorities to sustain the fish population in Ghana’s waters instead of going contrary to the laws.

Mr. Amarfio who is also Secretary to the Ghana Tuna Association said fishers should be made to understand why they should allow the fish to grow, noting that taking the fisher folk out of the management of the fishing sector had led to Ghana importing 60% of her fish consumption.

“Make them understand that they have to fish today for tomorrow and generations unborn,” he said, adding that, when the sardinella sponge, it’s about 50,000 eggs, and so if you catch one with the eggs in it, it means you are eating 50,000 fishes for the price of one,” he said.

According to him, fisheries management was not about stock management and issuing of fines and sanctions, but rather having a holistic management system, which had the fishermen at the Centre.

Mr. Amarfio indicated that even though Ghana has in place closed season for fishing, it does not have even one close area in the sea that would ensure that nobody fish in a particular area to protect a stock.

Mr. Francis Ameyibor, Tema Regional Manager on his part, said journalists need to take steps to report on the blue economy, which was an emerging concept which encouraged better stewardship of our ocean or ‘blue’ resources.

“GNA-Tema Regional team is being schooled on the blue economy to serve as vanguard of blue economy reporters to ensure improvement of human wellbeing and social equity, while significantly reducing environmental risks and ecological scarcities, which forms the basis for the blue economy,” Mr. Ameyibor noted.