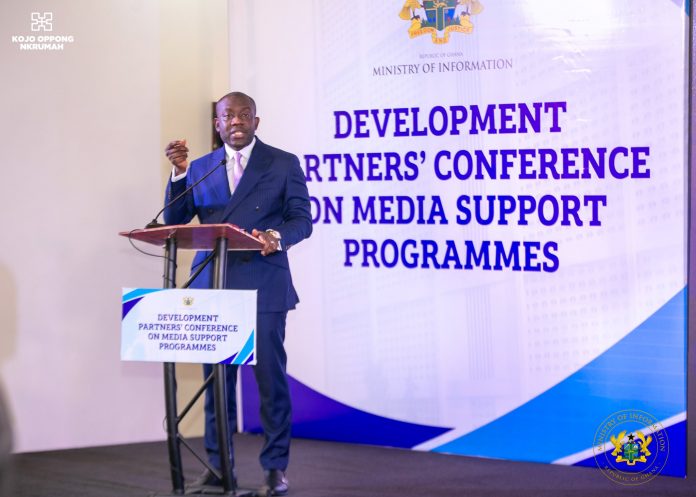 The Ministry of information is spearheading an ambitious drive to court support and funding from development partners, private sector, civil society among other groups to initiate media development programs which will create a conducive and safe environment for Media Practitioners and also enhance their capacity.

The programs are also intended to respond to the pressing needs of the media in the 21st century. Minister of information Kojo Oppong Nkrumah at the conference in Accra, noted that the support programs are expected to deal with the gaps in media practice and enhance the media’s contribution to the country’s growth and development.

The State had made a number of efforts in the past to support the media to serve its role as the fourth estate of the realm. Successive governments had attempted to aid the media with interventions that were targeted at helping to resolve some of the challenges without seeking to unduly influence the media.

These challenges range from lack of on the job resources to funding for capacity building. Other development partners have at other times offered training on election reporting and other matters of peculiar interest to these development partners. The private sector actors have also at times offered training support for business or sector related reporting.

The outcomes of such interventions have, however, not been extremely impactful. A recent example is the Media Development Fund of Former President Mahama’s administration, and the Mechanism on Safety of Journalists by this current administration. These could be humble reminders that more can be done in supporting the Ghanaian media going forward.

President of the Ghana Journalists Association, Roland Affail Monney who lauded the initiative was hopeful that it will in the long term to deal with perpetuating, ‘’ mediocrity which is on the rise in the Ghanaian media space’’.