The Ada Magistrate Court presided over by her ladyship Paulina Kwakyewa has remanded David Ayornu, the 31-year-old farm labourer accused of committing murder into prison custody for two months.

David Ayornu was arrested by the Ada Divisional Police Command on Friday, 3rd June 2022 for allegedly murdering his wife, Theresa Kwao, around 1:30 a.m. at Lufenya in the Ada East District.

Narrating the facts to the Court, Police Prosecutor Inspector, Godfred Yeboah, of the Big-Ada Police station, told the court that the Chief of Lufenya Nene Glover Owusu Ayornu whose house was opposite that of the couple heard a loud noise by the deceased calling for help.

Inspector Yeboah further narrated that Nene Glover Owusu Ayornu mobilised some neighbours and led them to the couple’s house where they met the accused outside.

He said when they questioned him about his wife’s call for help he told them that it was a little misunderstanding that ensued between them but they had settled it and that the deceased had even left for the market.

Inspector Yeboah revealed that the Chief who was not convinced by the accused person’s response and demeanor entered their bedroom where he found the deceased lying in a pool of blood with her intestines gashing out and also found was a blood-stained knife.

He concluded that the Chief together with the Assemblyman for the area, Mark Ayiku, informed the Kasseh Police and the accused person was arrested and the deceased was conveyed to the Police Hospital for autopsy.

Inspector Yeboah revealed that Police found a deep cut on the chest and the stomach of the deceased.

The case has been adjourned to August 10th, 2022 awaiting Attorney General’s advice. 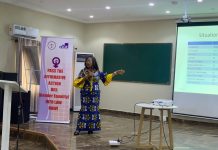