Murdered Mfantseman MP to be buried on November 27

By: Celestin Avi Some staff of the Liberian Broadcasting Service, the public broadcaster in Liberia, have ended a five-day training...
Read more

By: Oforiwa Darko The story about the quality of basic education and its impact on the future of the pupils...
Read more

The funeral of the late Ekow Kwansah Hayford, the slain New Patriotic Party’s (NPP) Member of Parliament (MP) for Mfantseman had been slated for Friday, November 27 to Sunday, November 29.

This was announced by the family during the one-week celebration of his death at Mankessim on Thursday, October 15.

It was a moment of tears, sadness, and sorrow as scores of mourners from all walks of life thronged the Mankessim park of the Mankessim Basic School to commensurate with the family as they marked the celebration of the MP’s death.

There was vehicular and human traffic as traders took advantage to cash in with the selling of NPP paraphernalia and that of the late MP.

Some of the mourners clad in red and black had belief and shock written on their faces as they shed tears for the demise of the MP and called for justice for him. 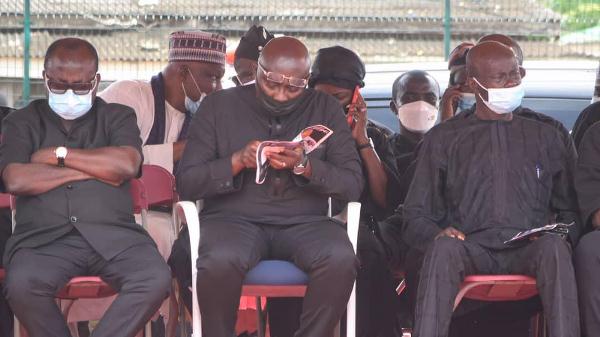 Very Reverend Emmanuel Adjei of the Mankessim Dioceses of the Methodist Church who presided over the ceremony urged the family and all Ghanaians to pray for the soul of the departed MP.

The General Secretary of the NPP, Mr John Boadu, who spoke on behalf of the Party and the Presidency, assured that the MP’s death would be thoroughly investigated and perpetrators brought to book.

Consoling the family and people of Mfantseman, he touted the achievements of Mr. Hayford who he described as a “great personality”  and prayed that “God would give all of us the fortitude to carry on in life”.

He pleaded with the constituents to fully cooperate with the Police by providing relevant information saying “we will need a lot of information on the ground”.

“The love shown here by the people is an indication of how well the late MP lived with the people of Mfantseman,” he stressed.

Mr Boadu charged the Party in the constituency to work hard to ensure victory for whoever will succeed him and to continue the good works.

“What we can do to honor him is to try and work hard to ensure victory for the Party. We can assure you that the good works of the late MP will be continued,” he stated.

The presidency presented cash of ¢50,000 to the family with a promise to further support the widow and children.

The Omanhen of Mankessim Traditional Area, Osagyefo Amanfo Edu VI, on behalf of the four traditional Areas in the Constituency, spoke highly of the late MP and said it would be difficult for him to be replaced.

They presented 20 crates of soft drinks, 20 cartons of water, and cash of GHS1,000 in support of the funeral.

MPs also presented ¢13,750 while the MMDCEs and Coordinating Directors also gave out ¢4,200.

The Party bore the cost of the ceremony and also presented 30 cartons of water, ten crates of soft drinks and GHc30, 000 for the funeral.

Other individuals, institutions, and agencies such as the CEOs of Ghana, the Mfantseman Municipal Assembly among others took turns to present to the family cash and items towards the final funeral rites.

Mr Hayford, 50, was shot by gunmen who stopped his vehicle on the Abeadze-Dominase–Abeadze-Duadzi– Mankessim road while returning from a campaign trip on Thursday, October 8.

By: Celestin Avi Some staff of the Liberian Broadcasting Service, the public broadcaster in Liberia, have ended a five-day training programme at the Ghana Broadcasting...
Read more
Education

By: Oforiwa Darko The story about the quality of basic education and its impact on the future of the pupils may be good for some...
Read more
General

Former President John Dramani Mahama, says even though the National Democratic Congress (NDC) was not happy with the conduct of the 2020 elections, it...
Read more

By: Beatrice Senadju GBC News has paid a surprise visit to Septuagenarian, Afua Akoto in the Ashanti Region. Afua Akoto is a Grandmother of...
Read more

By: Celestin Avi Some staff of the Liberian Broadcasting Service, the public broadcaster in Liberia, have ended a five-day training programme at the Ghana Broadcasting...
Read more

New Leadership for LiSAG after 16 years

By: William Owusu Boateng. Members of the Licensed Surveyors’ Association of Ghana, LiSAG, have for the first time, in the 16 years’ existence of the...
Read more

Be on the lookout for anyone who visits medical facilities with...