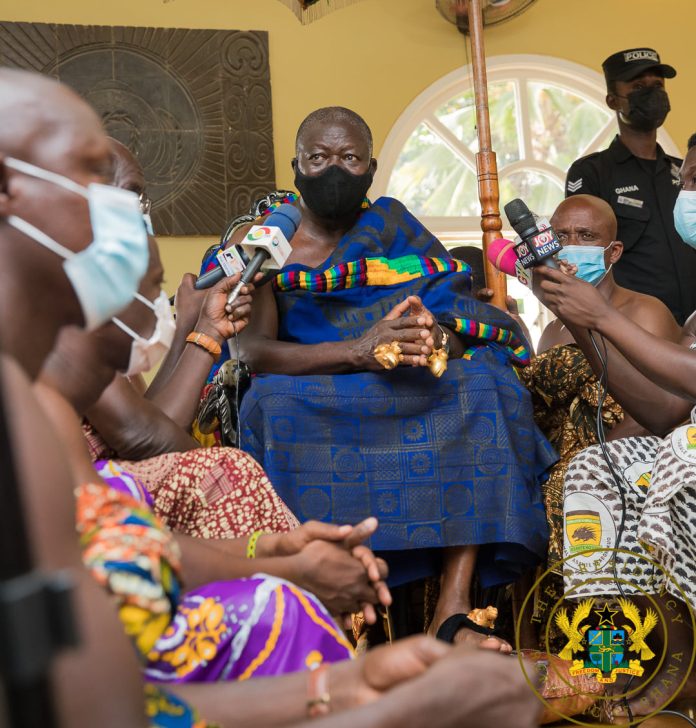 The Asantehene, Otumfuo Osei Tutu, has expressed excitement that the government has eventually found a partner to mine the bauxite deposit within the Nyinahin-Mpasaao enclave in the Ashanti region.

He says he is particularly satisfied that the bauxite will not just be mined but more importantly, a refinery is also to be built to process the mineral resource locally to derive better economic value from it to develop the country.

Otumfuo Osei Tutu expressed the sentiment at his Manhyia Palace in Kumasi when senior officials of the Ghana Integrated Aluminium Development Corporation, GIADEC and its partner, Rocksure International, called on him.

For many years, the Chiefs and People of Nyinahin and the adjoining communities have been anxious about development and exploitation of the bauxite deposit found within the enclave.

Key among their hopes from a bauxite mine in the area has been employment opportunities and infrastructural development.

However, despite promises by succeeding governments, mining of the mineral resource had remained only a wishful thinking until in September 2021, when government officially outdoored Rocksure International, a wholly Ghanaian owned firm with track record in mining and engineering, as a strategic partner of the GIADEC to explore further to determine the actual quantum of bauxite deposit within the Nyinahin-Mpaaso area located within the Atwima Mponua municipality of the Ashanti region.

The visit by the joint delegation of GIADEC/Rocksure International to the Manhyia Palace was for 2 key objectives.

The first was in recognition of Otumfuo Osei Tutu as the Overlord of Ashanti within which the bauxite deposit had been discovered and also, to formally introduce the new Board and Management of GIADEC as a national entity holding the right of the bauxite in trust of the state while informing him, again that government had selected Rocksure International to partner GIADEC in developing the bauxite deposit at Nyinahin.

Otumfuo Osei Tutu expressed confidence in the capacities of the Board and management of GIADEC on one hand, and Rocksure International, based on their individual and corporate expertise, to develop the Nyinahin-Mpasaaso bauxite deposit into a viable economic operation to boost Ghana’s fortunes.

While urging the Chiefs and People within the mine’s catchment to be less demanding of the company since actual exploration is yet to start, Otumfuo Osei Tutu entreated the project partners to also prioritise corporate social responsibilities to communities that would be directly affected by the mining activities.

The Deputy Chief Executive Officer of GIADEC, Akwasi Osei-Adjei, described the Asantehene’s endorsement of the project as an added impetus to the efforts being made to fully tap the economic prospects of the bauxite deposit which has remained elusive for many years.