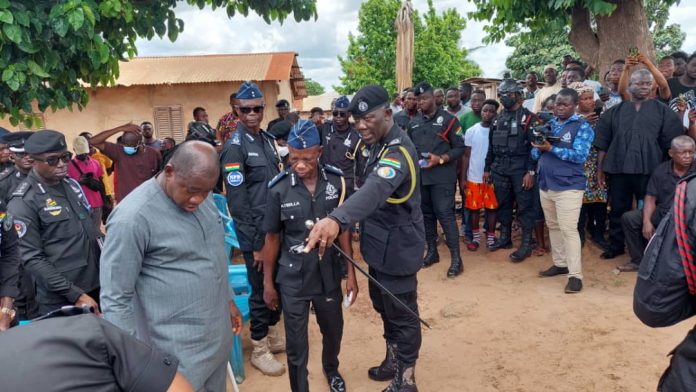 The Director-General of Public Affairs of the Ghana Police Service, DCOP, Kwesi Fori, says the IGP and his team have requested the families of Albert Donkor, a native of Nkoranza who died in Police custody after he was picked up on 25th April, 2022 and Victor Kwadwo Owusu who also died during the clashes between the Police and the youth of Nkoranza to work with the Police, for the post-mortem on the bodies to be performed immediately, to facilitate the completion of the investigation.

DCOP Kwesi Fori who made the point while speaking to Journalists in Nkoranza said Clinical Psychologists have been assigned to offer psychological support to Police personnel and their families as well as the deceased families.

The Police administration led by the IGP, Dr. George Akufo Dampare and his team have been in Nkoranza since Wednesday, May 25, 2022 on a fact-finding mission.

As part of the protocol there was a Media briefing in Nkoranza, by the Director-General of Public Affairs, DCOP Kwesi Fori, where he said as part of the Police redefined Communication strategy, the Service takes time in providing information in a manner that will not affect the credibility of investigations.

DCOP Kwesi Fori spoke about the progress of investigations into the death of Albert Donkor and Victor Kwadwo Owusu.

He said Ballistic Experts are currently assisting with the investigation.

DCOP Kwesi Fori, asked people to be circumspect when commenting on the issue beforehand.

The IGP and the team also took time off to hold meetings with all relevant stakeholders in Nkoranza as part of the fact-finding mission.

"Police are to protect and not assault citizens" – President Akufo-Addo