By Nathaniel Nartey Data from the State Insurance Company (SIC), has revealed that transit trade for the first quarter of...
Read more

The Accra Regional Police Command has arrested 109 persons for allegedly attacking a team of police personnel assigned to assist a bailiff to execute a court order at Ritz Junction.

Deputy Superintendent of Police (DSP) Effia Tenge, Head of the Public Affairs Unit of the Command, told the Ghana News Agency that the team was met with fierce resistance as some hooligans wanted to attack the bailiff and cause disturbances amid violence.

She said the team retreated, protected the bailiff and took him to safety. 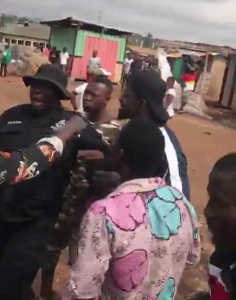 The Head of the Public Affairs Unit said on Wednesday, September 9, 2020, the Regional Police Command re-strategised and moved in to the said location and arrested 109 suspects including 13 females.

DSP Tenge said all the suspects were undergoing screening and those found culpable to have obstructed the police in the lawful discharge of their duty would be put before court.

Ms Josephine Oppong-Yeboah is a media personality and gender advocate. She believes that the best every community could do to their return migrants was...
Read more
Politics

By Michael Kofi Kenetey The Eastern Regional Chapter of the National Graduate Teachers (NAGRAT), has reechoed the call on government to pay heed to the...
Read more

By: Henrietta Afful Albert Kwabena Dwumfour has been elected President of the Ghana Journalists Association, GJA after the National and Regional Elections came to an...
Read more

By: Nicholas Osei-Wusu As the 31st July 2022 deadline for the merger of people’s mobile phone SIM numbers and their Ghana Card fast approaches, one...
Read more

By Nana Serwaa The election of National and Regional executives of the Ghana Journalists Association (GJA) is currently underway at the Graphic Communications group limited...
Read more