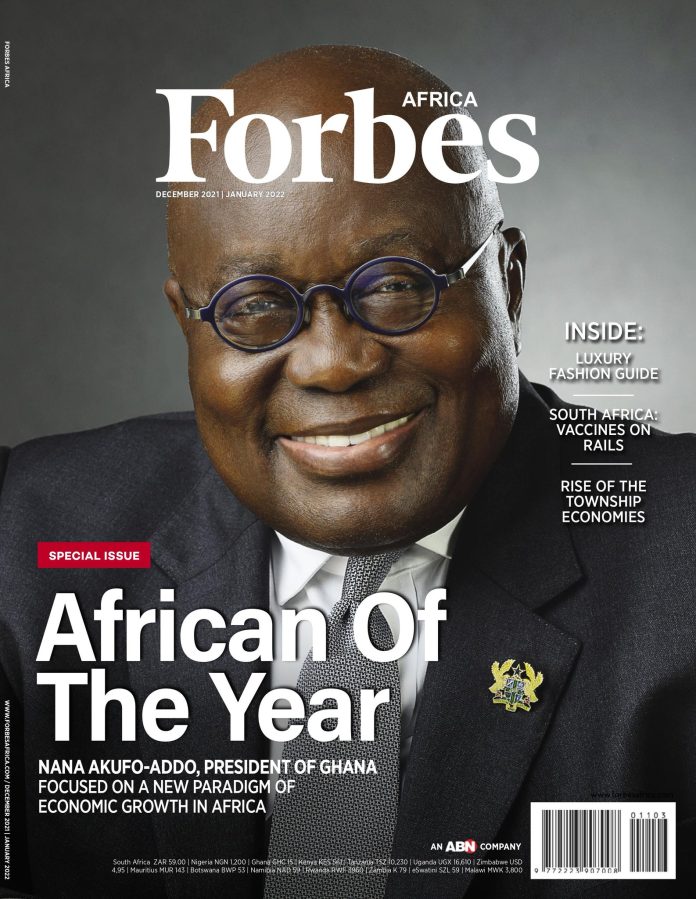 President Akufo Addo has described it as ”an honour” to have been adjudged African of the Year, 2021 by Forbes Africa Magazine.

The award which is in its fourth year recognises Africans that have made an impact on the Continent and the world stage.

President Akufo Addo in an interview with CNBC’s Africa Reporter Peace Hyde, said the magazine is a global brand…..it is an honour for me and I’m very grateful for it”.

”I’m overwhelmed, thank you very much for recognizing the work that we are doing here in Ghana, to be given this award. The name of your magazine is a global brand, everybody knows about it and for its African version to pick on me, is an honor for me and I’m very grateful for it. Understanding more than anything else to mean that the world is looking at the work we are doing here in Ghana. It is an encouragement for us to continue on the path that we have set ourselves,” President Akufo Addo stated.

The latest issue of the magazine acknowledged President Akufo-Addo’s effort in repositioning the country in the global marketplace as one reliant on its own resources and strengths.

President Akufo Addo joins the likes of Paul Kagame, President of Rwanda. Other receipts of the African of the Year Award are Thuli Madonsela, a South African Social Justice Advocate, honoured for her ”unwavering commitment to truth, and Billionaire African, Aliko Dangote, CEO of Dangote Group, a Nigerian Business Magnate and Philanthropist, described as the wealthiest person in Africa.

Two kids dead in fire at Moshie Zongo in Kumasi