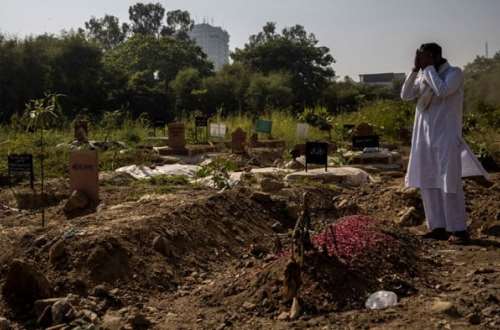 There is tension and agitation among inhabitants of Pramso in the Bosomtwe District of Ashanti following the relocation of the Town’s main Cemetery to a new site. In the following report, our Ashanti Regional Correspondent, Nicholas Osei-Wusu said the increasing agitation among the indigenes also has to do with the Health and Environmental implications that the new cemetery poses.

Pramso is one of the important traditional towns of Asanteman and the Bosomtwe District. It is located about a 15-minutes-drive from the district capital, Kuntanase and hosts the main referral hospital of the district. The town recently installed a new chief after years of a vacant stool. It was during this period that the government decided to extend the main Kyirapatre-Kuntanase road that passes through the town.

The road which is under construction is being expanded into a dual carriage hence requiring additional land space. The road project, therefore, is affecting the existing cemetery of the Pramso township. Through consultation, it was agreed that graves which will be affected by the road project be relocated to another part of the same cemetery. However, according to the people, more bodies than expected are being exhumed and they are being asked to relocate them to the new cemetery contrary to the initial agreement.

While the Bosomtwe District Assembly is claiming that only 16 graves have been exhumed to allow for the road construction, the residents insist that more than 200 have been removed. One of the residents, Madam Konadu, shared her concerns on the development with GBC News pleading with the authorities to intervene in the issues.

The Assembly Member for the Community, Mr. Frank Owusu Sekyere spoke about the concerns of the Community explaining their agitation.

When GBCNews visited the new Cemetery, it was observed that it is located about 30 metres from a water source known as River Danyame which sources say serves as the tributary of two other rivers downstream. Part of the river has been blocked to create access to the new cemetery. It is being used for agricultural and other purposes, while the new cemetery is sited within a new development area and very close to a church.

GBCNews chanced upon 70-year old Opanin Yaw Kiti on his cassava farm. Opanin Kiti told the news team that his crop farm that has served him and his family since 1968 together with another person’s oil palm plantation have been taken over for the new cemetery without compensation.

The agitations in the Pramso township involved both the aged and youth who wore red bands around their arms, neck and head while chanting war songs to drum home their concerns. GBC News proceeded to the Bosomtwe District Assembly at Kuntanase to get their side of the issues raised.

The District Chief Executive, Joseph Assuming, said the Assembly consulted the Community and the traditional leadership who together agreed on the removal of only those that fell within the road construction zone and that the bodies exhumed were agreed to be relocated to other parts of the same old cemetery. According to the DCE, though the District Assembly has approved of the new cemetery for the Community, it is only to host fresh corpses.