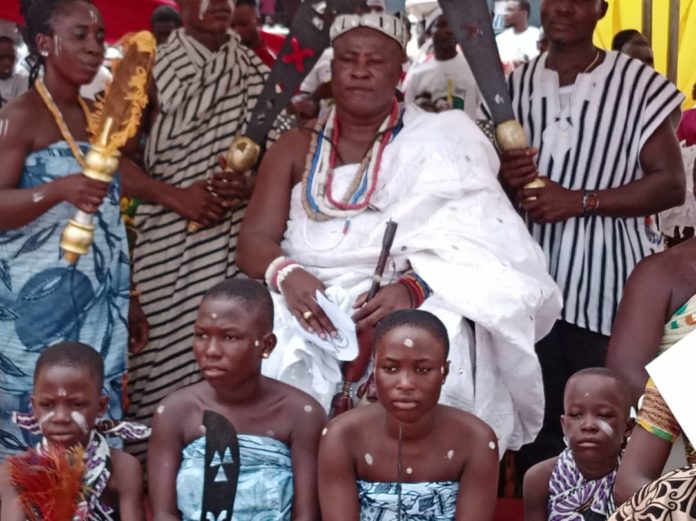 Residents in the environs of the Ayiku/Osabu shrine, in the inner part of Teshie in Accra, called Maa Mli, are appealing for maximum security protection following attacks on the priest, the shrine and incendiary actions on nearby houses.

One person was reportedly shot in the leg, sustaining gun wounds and in a serious condition.

Also, a number of houses were also set ablaze following a clash among several traditional authorities and their followers in the aftermath of seaside rituals for the impeding Homowo festival.

At least nine persons are reportedly in police grips following the clashes suspected to have been sparked by succession disputes.

The seaside ritual, called Nshorbulemor, is a kind of regatta and fishing expedition and rituals to the seaside gods, supervised by the Woleiatse, the chief fisherman, during which the best catch is selected and distributed among the various clans for the preparation of the traditional Homowo dish called kpekple.

However, investigations by the Ghana News Agency (GNA) revealed that the town is having more than one chief fisherman, with each attached to a side of a chieftaincy faction.

Eyewitnesses told the GNA that a faction of one of the claimants to the Teshie stool was blocked by the security of the current Osabu-Ayiku Wulormor, the chief priest.

“This infuriated the followers of the named chief, and they began pelting stones at a nearby Tsiewe Family house, and the Wulormor’s people replied in the same manner,” Mr Sowah Duah, who said he was an eyewitness showed empty cases of bullets to the GNA.

He said there was sporadic firing and the throwing of bottles, and a gas cylinder explosion, during which a bullet hit the leg of one of the followers of the name chief, with injury to his leg.

Mr Duah said some elders at Kotoko We, took part in the seaside ritual and in pursuit of them, the followers of the named chief set houses at Kotoko We ablaze.

Women in the area, led by one Madam Gladys Adjeley Anang, a resident rallied to put the fire out.

Mr Kpobi Mensah and Mr Jordan Adjetey Sowah, who said they were eyewitnesses and residents of the area, confirmed the incident, saying the firing was started by a faction from the side of the Shiketele, who were incensed at attempts by followers of one of the chiefs to attack the Wulomor.

Mr Adjetey Kommey, who identified himself as Secretary to Nuumo Badu Odarno Odiapenseh I, the Osabu/Ayiku Wulormor, confirmed the happens to the GNA, and added that a group of young men arrived and for some time chanted war songs and songs for upcoming Homowo, called Kpalalai, in support of the Wulormor.

He appealed for maximum security in the area to prevent further attacks and destruction.

Aside from burned houses at the Kotoko We, a number of houses, and rooms, including one prepared for a body to be laid in state had been burnt, with debris lying scattered about at Nii Ablorh Adjei We, from where some elders came to support rituals in connection with the festival at the Ayiku/Osabu shrine.

The Teshie Divisional Police confirmed the incident, but declined to comment, as they directed the GNA to the Deputy Greater Accra Regional Police Commander.