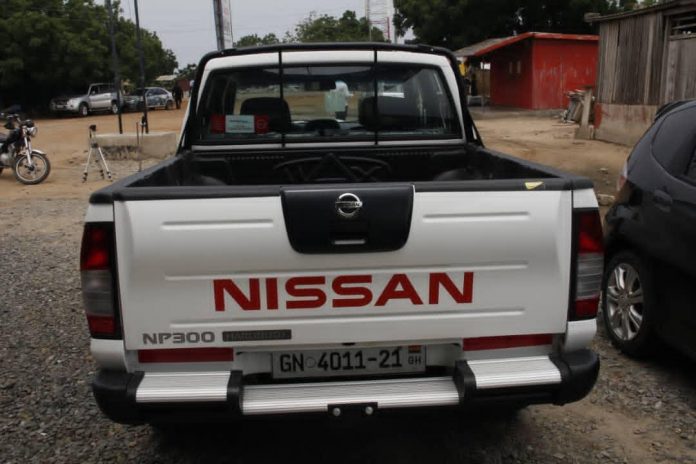 The Sege Police Command has received a Nissan 4X4 Pick-up from Electrochem Ghana Limited, a salt mining company under the McDan Group of companies.

The vehicle was to replace an old one that was involved in an accident beyond repairs on July 10th, this year.

Superintendent of Police, Mr. Francis Kwame Somiah, Ada Divisional Police Commander who received the vehicle on behalf of the command, commended Electrochem for the donation.

He said they needed patrol cars for easy access to where the community may need the police in curbing criminal activities in the two districts.

He appealed to philanthropists to assist the police with pickups, ambulances and accommodations to ease their work in the Ada Division.

Civil Engineer in Charge of Community Projects of Electrochem, Nene Odeopeor Tetteh Siada II handed over the vehicle to the District Chief Executive who also handed it to the police.

He said the donation was in response to a distress message from the Police through the Ada West District Assembly that they needed a vehicle to assist them in patrolling since theirs was involved in an accident.

Mr. Bernard Korley, Community Relations Manager and Public Relations Officer for Electrochem noted that “it is a core mandate of Electrochem to support the government agencies in providing security to the people”.

District Chief Executive for the Ada West District, Mr. Adzoteye Lawer Akrofi expressed gratitude for the donation.” Barely a week ago, we had a huge problem. Our police patrol vehicle was involved in an accident which is beyond repairs, but Electrochem came to our aid in just less than a week.

“This vehicle came at the right time and on behalf of the District Security Committee, we think it is highly commendable for an investor to donate two vehicles to the police in less than six months,” he said.

This he said would help the district to detect, control, and combat criminalities in the district.

Users of faulty condoms in Uganda urged to get tested for...