gbcghana online
Sign in / Join
Home News Education Surrender your wards to the police – Ashanti REGSEC to parents of...
Share
Facebook
Twitter
Pinterest
WhatsApp
Print
Linkedin
Telegram
By: Nicholas Osei-Wusu
Chairman of the Ashanti Regional Security Council, Mr. Simon Osei Mensah, has directed Police at Effiduase to immediately declare any of the School Prefects of the Krobea Asante Technical-Vocational Institute wanted and pursue them for arrest.
Similarly, any parent or guardian hiding any of the students of the school should surrender him or her to the Police also immediately for the law to take its cause in an effort at finding a solution to the rampage that occurred at the school at the weekend.
Mr. Osei Mensah gave the directive after a visit to the school at Asokore in the Sekyere East district in the Ashanti region. Last Saturday night, students of the Krobea Asante Technical and Vocational Institute in the Sekyere East district in the Ashanti region reportedly went on a rampage. Even though formally, the immediate or remote reasons of the demonstration are unknown, speculation has it that, the continuing students are unsatisfied with the performance of their immediate predecessors at the NAPTEX external examination among other allegations.
The Principal of the Institute, Mr. Evans Douglas Salvo, explained to the media, what actually happened. 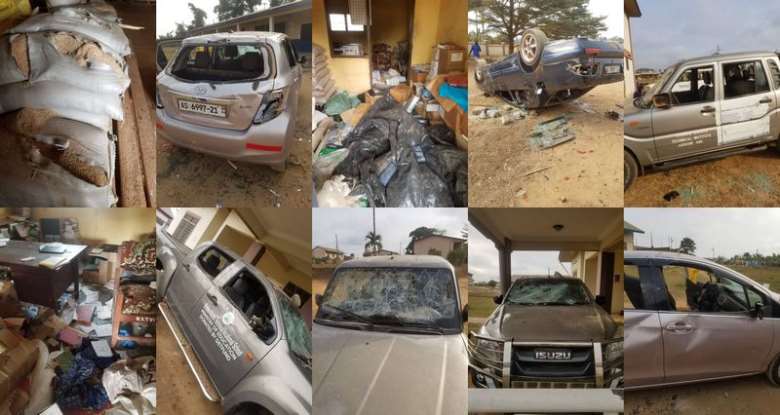 In the heat of the riot, four official school vehicles and two private ones belonging to some teachers were damaged, food items at the store to feed them were also destroyed aside from some other school properties. It was the swift response of the District Police that helped to save the lives of teachers particularly the Principal whose official residence the rampaging students had invaded earlier.
On the recommendation of the Sekyere East District Security Council, the Ashanti Regional Security Council, REGSEC in consultation with the Regional Education directorate closed down the Institute indefinitely.
In a follow up to ascertain the reality of the situation, Chairman of the REGSEC, Mr. Simon Osei Mensah, who is also the Regional Minister, in the company of others, toured the premises.
He learnt that, even before the official close down of the school, the students had run away.
The REGSEC Chairman also held an in-camera meeting with the key stakeholders to get detail briefing about the incident. Eventually, he met the media to announce a raft of measures to instill sanity at the institute.
Mr. Osei Mensah announced the composition of a five-member Investigation Committee to unravel all circumstances regarding the riot including the legalities, culpability of individuals and groups at the school, values of the damaged vehicles and other properties saying that, ultimately, the students will bear the full cost since government does not have the funds now to bear the cost.
Mr. Osei Mensah indicated that, the date for re-opening the school depends largely on the report and subsequent measures to be put in place.
The REGSEC Chairman the District Police Command to declare all the School Prefects wanted in connection with the riot.
CLICK HERE FOR MORE ON EDUCATION