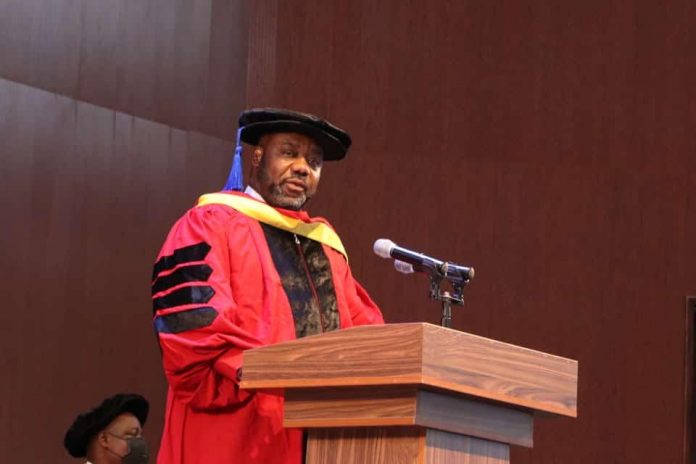 The University of Professional Studies, Accra (UPSA), has conferred an honorary doctorate on Dr Matthew Opoku Prempeh, Energy Minister (a former Education Minister from 2017-2020) at its 13th Special Congregation.

The honorary doctorate was in recognition of Dr Opoku Prempeh’s contributions towards the advancement of education in Ghana.

During the Congregation, a total of 870 students from the UPSA School of Graduate Studies and the UPSA Law School graduated.

Out of this number, the School of Graduate Studies presented 764 students whereas the UPSA Law School graduated 106 students.

Vice President Dr Mahamudu Bawumia was the special guest of honour at the Congregation.

A visibly elated Dr Opoku Prempeh in his acceptance speech expressed gratitude to the UPSA Governing Council and Management for the honour done him.

He recounted that when he took over as an Education Minister in 2017, he faced the daunting task of implementing the Free Senior High School (SHS) education programme, however, with determination and the help of God, the Government was able to do it.

He said the Government was determined to ensure that all junior high school graduates who qualify for admission into SHS, would have access to secondary education free of charge.

“As a society, our collective security lies in the people, we chose to lead us, to make decisions on our behalf, to protect us and to ensure our wellbeing,” he said.

“It is crucial, therefore, that we nurture the right leaders to ensure that the right calibres of people are brought up in this country for the task ahead.

What this means is that we must deliberately give leadership grooming the urgency that it deserves right from school till we start political or active lives.”

He noted the positions that God allows people to occupy in society was not for their self-aggrandizement but a responsibility to ensure that they improve public service and add value to it.

“If we are able to bring up the right leaders, then we will be setting our country on the path to prosperity,” Dr Opoku Prempeh said.

He commended some individuals such as Prof Dominic Fobi, a former Education Minister; and Prof Jiphus Anamoah Mensah, a former Vice-Chancellor, University of Education, Winneba, who had assisted him in his efforts to implement the Free SHS.

He said during his tenure, over 13 legislations were passed by Parliament to transform the education sector.

Professor Abednego F.O. Amartey, Vice-Chancellor, UPSA in his report said the University enrolled 8,247 new students at the beginning of the 2020/2021 academic year, bring the total student population to 18,074.

Throwing light on the UPSA’s growth over the last four years, the Vice-Chancellor said the exponential growth illustrates how the UPSA had greatly benefitted from the immense support they received from Dr Matthew Opoku-Prempeh, a former Minister of Education and the Governing Council of the University.

“In 2017, we had a total of 20 academic programmes. We have increased that number to 30, representing a 50 per cent increase. It is nothing that we also have about seven additional programmes in various stages of accreditation.”

He noted that during the period under review, their infrastructure projects included the commissioning of the new auditorium and student centre, the completion of the astroturf and three near-completion construction projects.

“The above significant achievements amply demonstrate why UPSA among other things is honouring Dr Opoku Prempeh today.”

Advising the graduating students, the Vice-Chancellor urged them to work hard and excel wherever they find themselves.

He entreated them to become worthy ambassadors of the UPSA by exhibiting the values and tenets they had imbibed throughout their studies.

Dr Kofi Ohene-Konadu, Chairman, UPSA Governing Council, advised the graduands to always do what was right and not what was easy.