By: Akosua Adjei In order to elevate the Ghana Premier League, betPawa, in collaboration with notable sports media journalists and...
Read more

By Edzorna Francis Mensah The Government Statistician at the Ghana Statistical Service has called for an establishment of Integrated Shea...
Read more

Vice President, Dr. Mahamudu Bawumia has cut the sod for the construction of a 10-kilometer Berekum town roads.

The roads are part of several roads in the country being funded under Phase One of government’s Synohydro infrastructure for bauxite agreement, and it adds to ongoing construction and rehabilitation of Berekum town roads by the Akufo-Addo government.

The sod-cutting ceremony was met with excitement by the Chiefs and people at a durbar, and they expressed gratitude to the Akufo-Addo government for prioritising their deteriorated roads, which had been neglected over the years.

Addressing the Chiefs and the people of Berekum, Dr. Bawumia said the Berekum project is further proof of the immense benefits of the Synohydro agreement. 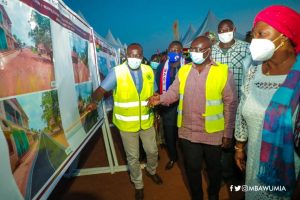 This he said, is not the only project under the Synohydro agreement. Accra and Kumasi inner city roads are being done, the Tamale Interchange project, the PTC roundabout interchange in Takoradi, the Adenta-Dodowa dual carriage way, the Western and Cape Coast inner city roads, upgrading of feeder roads in Western and Ashanti, Akim Oda-Ofoase-Ayirebi road,  Hohoe Jasikan-Dodo Pepeso road are all being done.

Dr. Bawumia assured the Chiefs and people of Berekum of the Akufo-Addo government’s commitment to their welfare, adding that the rehabilitation of the roads and other projects prove that.

The Omanhehene of Berekum, Nana Dr. Amankra Diawuo who led Chiefs and Queenmothers to the grand durbar, said the sod cutting for the Synohydro project adds to the ongoing road rehabilitation in Berekum, and it gives him much joy.

He added that the rehabilitation of town roads in Berekum marked the fulfillment of a request he made to  Vice President Bawumia during a visit.

The Berlin-Sofoakyre road, Kyirebaa road, Patasie road in Berekum are among the roads to be constructed by Sinohydro in Berekum.

By: Akosua Adjei In order to elevate the Ghana Premier League, betPawa, in collaboration with notable sports media journalists and...
Read more
Business

By Edzorna Francis Mensah The Government Statistician at the Ghana Statistical Service has called for an establishment of Integrated Shea Butter Processing Factories in the...
Read more
General

By: Franklin ASARE-DONKOH The World Health Organization (WHO), has projected that Africa is likely to experience a 5.3 million health worker shortage by 2030. It explained...
Read more
Politics

By: Peter Agengre A Legal Practitioner, Lawyer Lamtiig Apanga, has declared his intent to contest the parliamentary primaries on the ticket of the National Democratic...
Read more

By: Henrietta Afful ​ A new World Health Organization (WHO) Report says injuries and violence take the lives of about 12 000 people around the world...
Read more

The UN Special Rapporteur on Toxics and Human Rights, Dr Marcos Orellana, will visit Ghana from November 30 to December 13, 2022, to assess...
Read more