“The contributions of the Catholic Church in the areas of education, health, water and sanitation is unmatched when you compare it with other religious sects’. Those were the words of the Upper West Regional Minister, Dr. Hafiz Bin Salih when members of the Ghana Catholic Bishops’ Conference called on him ahead of the commencement of the 2021 annual plenary at Wa.

The plenary Assembly is on the theme “Fratelli Tutti and COVID-19: Pastoral Opportunities and Challenges in Ghana”. Led by its President Most Reverend Philip Naameh, the conference told the Minister that “Everywhere that we go we call on the Regional Minister, traditional rulers, Chief Imams and interact with the people to know their problems and challenges so that together we can work to address them”.

The Regional Minister Dr. Hafiz Bin Salih commended the Catholic Church for working to support the government’s efforts in improving the lives of the people.

Information from the Wa Diocese indicates that Catholicism started in the Upper West Region 92 years ago at Jirapa. The conference therefore, could not have been completed without a visit to the place. Speaking on behalf of the paramount chief of Jirapa, Naa Nsole Ganaaa, his aide Justice Dinaa said Naa Salifu Ganaa the First and the Tendamba released land for the Catholic Church to be established in 1929. Since then the traditional authorities have no regret over their decision. Mr Dinaa said the church has brought so much development to the area. He mentioned education, health, livelihood empowerment as some of the benefits. The chief appealed to the Catholic Church to turn Saint Joseph’s Parish to a Minor Basilica. President of the Conference Most Reverend Naameh paid tribute to the chief for helping to establish Catholicism in the region. Members of the Conference visited the thumb of Naa Salifu Ganaa and prayed for his soul.

Before the members of the Conference got to the Saint Joseph’s Parish also in Jirapa, hundreds of Catholic faithful had lined up to welcome them. The Parish Priest Fr. Bennett Tang Bancheyie briefed them on how the church started in the region.

“On November, 29 1929, some 92 years ago, the pioneer Missionaries of Africa led by Fr Remigius McCoy, Fr. Pacquet, both Canadians and Brother Basilide from Netherland embarked on a missionary journey which was the beginning of the evangelization of the North West of Ghana, now the Catholic Diocese of Wa”, Fr. Bancheyie told the Bishops. He said though the land for the church was generously given, it was also meant to test the genuineness of the white people whom they have never seen before, as the area was considered to be evil-spirit infested and a no go area for the indigenous people. The Parish Priest said on December 8 1948 the cornerstone of the present stone church building was laid and completed in 1954. Members of the conference rounded up their visit to Jirapa at the Royal Cossy Hotel, also known as Jirapa Dubai where they were taking round the magnificent presidential villa by Eric Johnson, the owner of the facility.

Opening ceremony of the plenary

The Bishop of the Wa Diocese Most Reverend Richard Kuuire Baawabr during the opening ceremony of the week-long event said the Diocese is fulfilling its obligations to the people of the region.

”The Catholic Church in the region has promoted indigenization and enculturation and it is ever mindful of the call to work towards being self-reliant and self-sustaining Church”, Bishop Baawabr said.

He added that the Church has established basic Christian communities, skills training and access to affordable rural social services, amenities and infrastructure like schools, clinics and hospitals. 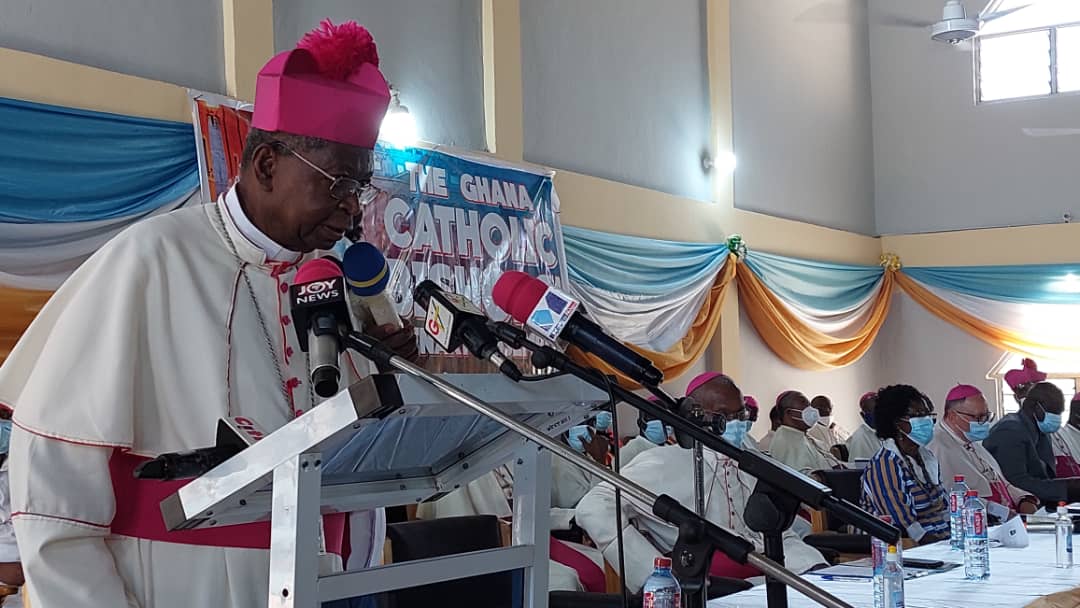 Metropolitan Archbishop of Tamale, Most Reverend Philip Naameh who is the President of the Conference said the theme of the plenary “Fratelli Tutti and COVID-19: Pastoral Opportunities and Challenges in Ghana”, was informed by the impact of the pandemic on every sector of the economy and evangelization. He called on the government to take practical measures to help mitigate the impact of the COVID-19 Pandemic by initiating policies that will lead to the creation of jobs for the youth. He further asked for a dialogue between the government and other stakeholders to address difficulties that have arisen in the education and health sectors due to the pandemic. He challenged the Church at all levels to embrace the use of traditional and social media platforms as vehicles for evangelization. The man of God also advocated the deliberate programme to educate youth people on the proper use of the internet and social media emphasizing its opportunities and dangers. 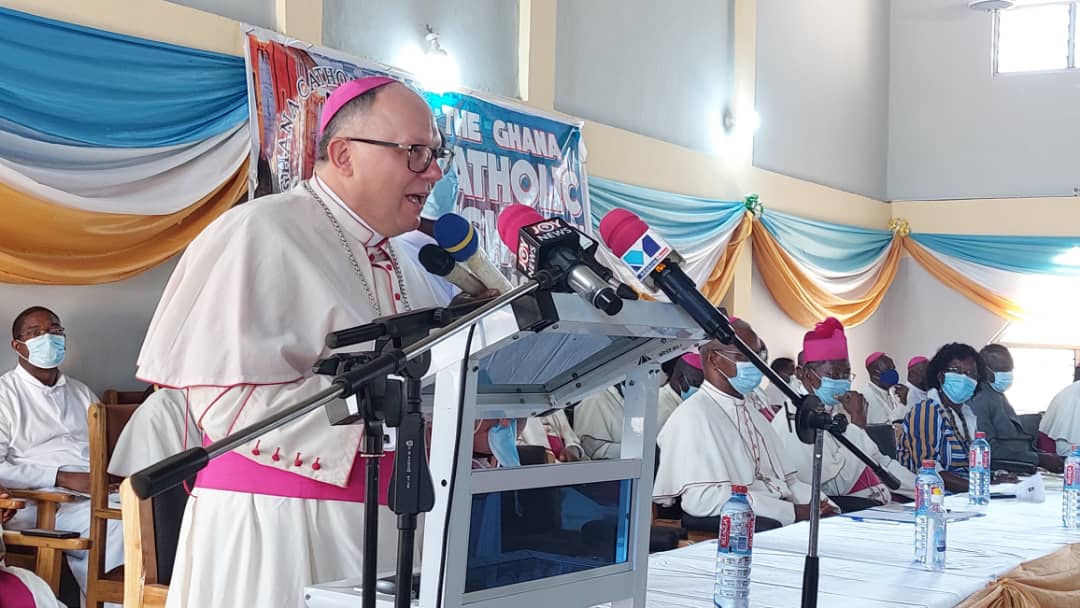 The Apostolic Nuncio to Ghana Most Reverend Henryk Mieczysław Jagodziński said the Catholic Church donated 70 thousand Ghana Cedis to the National COVID-19 Trust Fund and released its facilities to be used as treatment centres in the treatment against the pandemic. All this he aimed at mitigating the impact of the pandemic on Ghanaians.

The Regional Minister Dr. Hafiz Bins Salih for his part said the contributions of the Catholic Church to national development cannot be underestimated stressing that the government will continue to partner with the church to better the lot of the people. He said the annual communique issued at the end of the plenary of the Ghana Catholic Bishops’ Conference is of immense help to the government and the nation as a whole. He expressed the hope that the Conference will continue to play its role as a national stakeholder by shaping the lives of the millions of the Catholic faithful and Ghanaians at large.

The Chiefs and Imams during a courtesy call on them by the Bishops appealed to the men of God to continue to kick against the promotion of the practice of the LGBTQ +.

Boeing to suspend production of 737 Max in January after fatal...

Argentina radio host ordered to have feminists on show