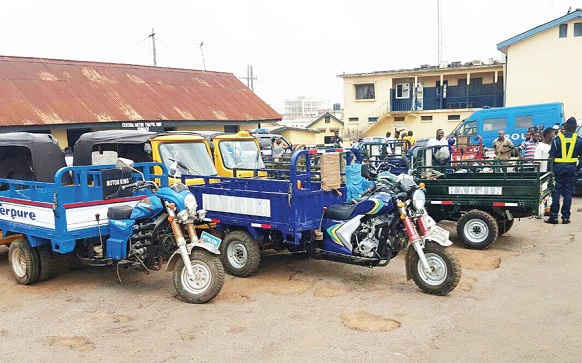 The Executive Director for the Chamber of Petroleum Consumers (COPEC), Duncan Amoah has stated that he fully supports the ban on “Aboboyaa” from using the Highways.

However, the government should go beyond the ban and address the root cause of their plying of Highways.

His comments come on the back of the directive given by the Greater Accra Regional Minister, Henry Quartey, during a speech at the “Clean your Frontage” campaign launch in Accra.

Duncan Amoah said that these tricycles plying the motorways could have been better dealt with if garbage trucks and other technologies for recycling waste were put in place.

“If a better system of managing waste was brought about, “Aboboyaa would not have anything to pick”, he noted.

In comparing other countries like Norway, Denmark and Sweden, he noted that such countries are in short supply of waste due to how they manage waste.

Mr. Amoh urged the Minister to add a more “concrete solution” by getting more garbage trucks to work around the clock.

“Aboboyaa” is a local term for a mechanized truck like tricycle used mainly for commercial purposes because of the convenience it adds to transporting goods. However, in recent years the use of these vehicles have caused all sorts of nuisances and danger to other road users.

Trump escapes impeachment onslaught to give Texas Republicans a boost