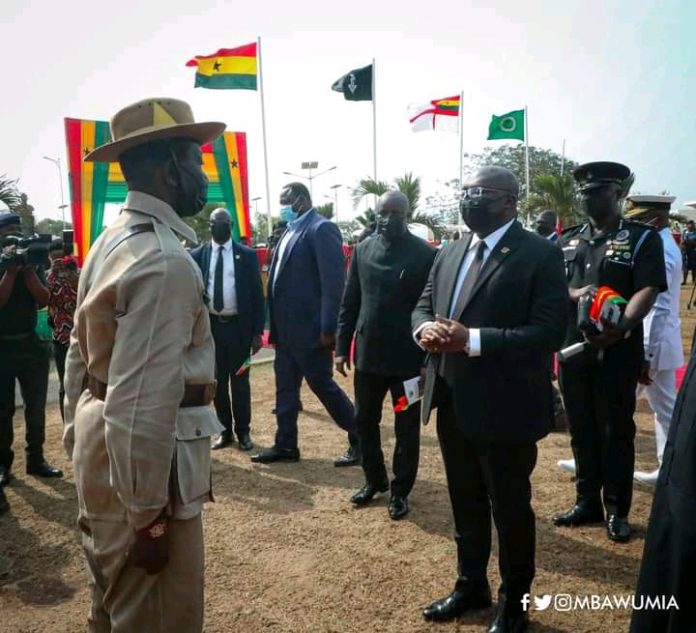 A wreath laying and flag raising ceremony has been held at the Nationalism Park to commemorate the 74th Anniversary of the 28th Christiansborg Crossroad shooting. The ceremony has been held over the years to honour the three fallen heroes who were killed by the Colonial Police on their way to present a petition to the then Governor. Vice President Mahamudu Bawumia, Ministers of State, Service Commanders among others graced the occasion.

The 28th February Christiansburg Crossroads shooting is observed annually to honor the defenseless Ex-Servicemen who were killed by the Colonial Police while marching peacefully to the Osu Castle to present a petition to Governor Gerald Creasy. Sergeant Adjetey, Corporal Attipoe and Private Odartey Lamptey were all members of the then Gold Coast Regiment of the Royal West African Frontier Force, that fought alongside the allied forces during the Second World War. The Executive Director of the Veterans Administration of Ghana, VAG, Captain Ben Edmund Duah summarized events on that fateful day.

”….the news about the death of the gallant Servicemen spread rapidly, leading to a situation where law and order broke down in Accra and other parts of the country. This encouraged anti-colonial movements to press the British government to institute a committee to investigate the killings and general disorder”.

”The Committee recommended a self-government for the Gold Coast”.

”This subsequently led to the attainment of political independence for the country”.

A contingent made up of the Army, Navy, Airforce, the Police and the Veterans Administration of Ghana, VAG took part in the day’s event.  Sounding of the last post, a minute silence and the reveille was observed as part of the flag raising ceremony.

Vice President Mahamudu Bawumia laid a wreath on behalf of the Government and people of Ghana.

The Chief of the Defence Staff, Vice Admiral Seth Amoama laid one on behalf of the Ghana Armed Forces and other security services. The Board Chairman of the Veterans Administration of Ghana, Maj. Gen C.B. Yaachie laid another one on behalf of VAG. The Gbese Mantse, Nii Ayibonte laid a wreath on behalf of Traditional Rulers.

A representative of the late Sergeant Adjetey, Nii Ala Nmashei laid a wreath on behalf of the fallen heroes.

Some of the Service- men shared some thoughts.

”It was an occasion to remember our men who died during the shooting…we have to remember them all the time”.

Nogahill Footbridge at N1 Highway poses no risk to public...