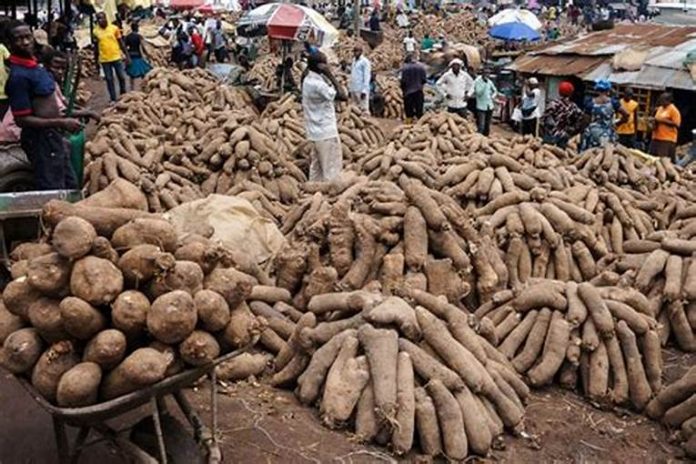 Prices of yam, cassava, and cocoyam have been fluctuating in the markets of West Akyem, East Akyem, and New Juaben South due to the new harvests for the 2021 crop season.

The prices of tubers in key towns of the Eastern Region remained unstable this June, though there had been some increases in fuel prices which has sparked a marginal transport fare rise.

Marketers in a survey conducted in Asamankese, Kyebi, and Koforidua ascribed the unstable price situation to the new crop season and varying weather conditions, giving way for fresh crop released unto the market.

Several of them also blamed the situation on economic hardships as a result of the COVID-19 pandemic which has brought most economies on their knees as world leaders and scientists battle for an antidote.

The survey in Asamankese showed that yam and cassava prices were unstable in the local markets with a medium-size of yam which used to cost GH¢ 5.00 in January 2021  now GH¢ 10.00, representing a 100 per cent increment.

The story was not any different with cocoyam traders at the Asamankese market as the price of a mini sack of cocoyam has surged to GH¢ 200.00 from GH¢ 80.00 as at the beginning of this year.

Ms Akyere Mavis, a cassava trader at Asamankese market, said prices of cassava and other tubers, were always unstable during the new yam season, adding, though the price of cassava has decreased, customers hardly purchased it because of economic hardships.

She attributed the increment in the prices of yam to the new yam season and weather changes, saying, it was either farmers complained about the crops being usually destroyed by excessive rains or burnt by uncontrolled bushfires.

Some traders added that the destruction of tubers of yams on the farms was due to heavy rains, resulting in a significant reduction in supply as well as by other factors, fueling the price increase.

Ms Comfort Osei, 52, who trades yams in relatively large quantities, noted that most farmers have not started supplying fresh yams to the market because some customary rites had not been performed to pave way for supply.

Ms Abena Atwiwaa, who sells fried yam, said the increase in yam prices has affected their sales and profit margins because retailers had to buy more tubers of yams before being able to even break even.

Madam Grace, a chop bar operator, said: “The unstable prices of tuber crops is affecting my business,” adding that, she was compelled to reduce the amount of food prepared daily just to stay in business.

“Sometimes I have to reduce the size of fufu due to the increase of the price of cassava and most customers do not understand,” she said.

Ms Adjoa Sarpong, a 32-year-old cassava and plantain seller at the Agartha Market in Koforidua said prices of foodstuff increased during the dry season and when fuel prices went up.

She added that sometimes heavy rains destroyed many tubers and plantains on the farms, leading to a reduction in supply and an increase in prices.

At Kyebi, Ms Ama Mansah, who sells yam, said prices have not changed. “It still sells at GH¢ 8.00 per tuber and because it is perishable, cannot afford to keep it for long.
“Despite transportation charges we incur to bring them to market, we have to sell them fast to avoid spoilage.”

Nana Akua, a buyer complained bitterly about some foodstuffs being increased. “Taking GHS200.00 along to the market previously earned my family and I enough foodstuffs for three to four weeks but now it’s not like that, it has depreciated to two weeks.”

Other buyers also lamented over some spoilage of foodstuffs being mixed with the good ones by the sellers due to the low rate of buying to avoid loss of income.