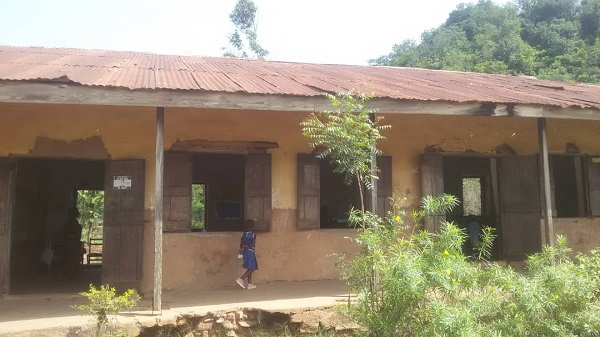 Huhunya Presbyterian Basic School in the Yilo Krobo Municipality of the Eastern Region is likely to be closed down due to its dilapidated classroom.

The School Management Committee Chairman, Isaac Kodi said the action is to prevent any future disaster as the lower primary block and parts of the upper primary have become a death trap for the pupils.

Mr. Kodi said this in an exclusive interview with GBC News at Huhunya.

The Huhunya Presbyterian Basic School has been in existence for decades but has not gone through any renovation.

The facility, which is the only basic school in the area, serves about 20 communities such as Akusum, Salom, Aboabonya, Bosotwe, Perchiri and Agortsom among others with a student population of almost 400.

The walls of the buildings have developed cracks with the ceiling being torn apart.

This has made the structure very weak.

The floors of the classrooms have also developed potholes while other parts have not been cemented.

The weak nature of the building  poses a threat to the lives of the innocent children.

The structure was erected through the combined efforts of the town folks after they realized that the building that shelter the children at that time was a death trap which could bring about a disaster at any point in time.

The School Management Committee (SMC) Chairman, Isaac Kodi appealed to stakeholders to come to their aid.

The Assemblyman for the area, Joseph Tetteh and the Dademantse Isaac Kwame Tetteh who spoke to GBC NEWS lamented the situation adding that sometimes cattle invade the school when class is in session but efforts to reach the owners to put a stop to that proved futile.

According to them, they have reported the plight of the students as a result of the dilapidated nature of the school to the appropriate authorities such as the Municipal Assembly and the Municipal Education Directorate but their efforts have yielded no positive result.

They are therefore appealing to the government, NGOs, philanthropists, individuals and other benevolent organisations to come to their aid. 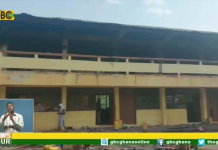