Management of OLA Senior High School in Ho, the Volta Regional capital has urged past students, and benevolent organizations to support the school to deal with its infrastructural deficit. There has been a significant rise in the school’s enrollment since Free Senior High School program was introduced, contributing to an over-stretched facilities most of which were constructed several decades ago.

The Headmistress, Regina Coffie said there is the need for new infrastructure and expansion on existing facilities to support its increasing student population. She was speaking during an engagement with the 2001 Year Group of Past OLA Girls Association (POGA). The group was at the school to handover its auditorium broken Armchairs they had refurbished to Management.

The General Secretary of the 2001y Year Group, Rosemond Safiamor Ampoti said the gesture is to pave way for other projects. She appealed for more support for the school.

“We took it upon ourselves to refurbish the Assembly Hall chairs for our younger ones because they were in a very dilapidated state. That was what we decided to do for our 20th Year celebration after school. We look forward to doing more’’, she stated.

The Headmistress of OLA Girls SHS, Regina Coffie thanked the 2001 POGA batch for their gesture but, urged the past students and benevolent organizations to support the school to deal with its infrastructural deficit.

“We are grateful to God for blessing them and equally coming back to bless us. Just like Oliver Twist, we need more, there is more to be done OLA, we are in dire need on infrastructure like classroom blocks, dormitories, dining halls, because the number of students we have now is 10x than before” according to the Head Mistress.

Members of the 2001 Year Group of POGA who are marking their 20th Anniversary took turns to advise the current students on the need to strive for academic excellence, so as to become useful citizens. 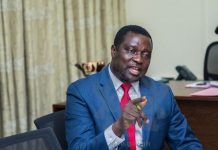 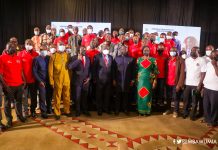