By: Rachel Kakraba Commuters who use the Kaneshie Market footbridge for safe crossing to and from the market, have raised...
Read more

BY OFORIWA DARKO On day two of the Prime Minister of Denmark’s working visit to Ghana, Mette Frederiksen, toured the...
Read more

By: Bubu Klinogo The New Patriotic Party (NPP) Majority in Parliament has asked Ghanaians to disregard reports that the 2022...
Read more

A six-unit classroom block has been inaugurated for the Tamale Senior High School (SHS) at a ceremony in Tamale today (February 27).

The classroom block which is aimed at solving the double-track system in the school was funded by GNPC Foundation.

The Headmaster of the Tamale Senior High School, Reverend Edward Azerka said the classroom block is timely and that the school had to convert some of its facilities such as the laboratory into a classroom block because of the lack of space.

He commended the GNPC Foundation for the gesture and promised that the building will be put into good use.

Reverend Azerka used the occasion to appeal to other organizations to come to the aid of the school. 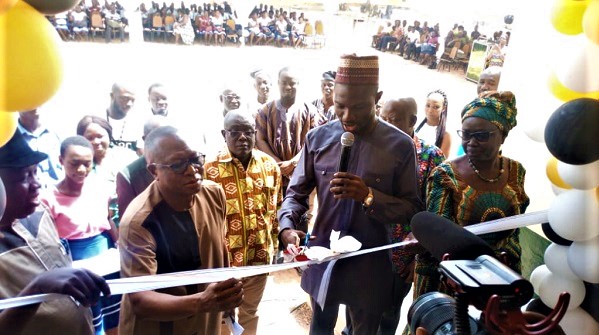 The Executive Director of GNPC Foundation Dr. Dominic Eduah said the foundation has taken a bold step to ensure that it plays a role in education for the development of the country.

He said every Ghanaian child should get access to education, irrespective of one’s ethnic, religious and political affiliation.

Dr. Eduah advised the school authority to maintain the block so that generations can benefit from it.

The Northern Regional Director of the Regional Co-ordinating Council, Issahaku Alhassan said the Council will soon inaugurate many projects including school blocks to enhance teaching and learning.

He proposed a maintenance plan for the school so that they can save the classroom block from deteriorating early.

The Sagnarigu District Director of Education Samata Mahama emphasized that the building will help reduce pressure on the existing facilities and appealed for more support from the foundation so that many schools can benefit it.

By: Rachel Kakraba Commuters who use the Kaneshie Market footbridge for safe crossing to and from the market, have raised...
Read more
General

By: Bubu Klinogo The New Patriotic Party (NPP) Majority in Parliament has asked Ghanaians to disregard reports that the 2022 Budget has been rejected. Last night,...
Read more
Politics

By: Bubu Klinogo Reports indicate that Parliament last night voted in an attempt to reject the 2022 Budget Statement and Economic Policy of the  government,...
Read more
General

By Nathaniel Nartey Facebook: Nathaniel Nartey Twitter: @Annertey­_Nartey An intended presentation of a petition by members of the #Fix The Country Movement, to Parliament on November...
Read more

2022 Budget has lots of prospects for Education – Dr. Osei-Adutwum

By Bubu  Klinogo The Minister of Education, Dr. Yaw Osei Adutwum, has hailed the 2022 Budget, saying it portends great prospects for the future of...
Read more

By Nathaniel Nartey. School selection for BECE Candidates is to commence November 29 and end December 14, 2021. Ahead of the opening of the School Placement...
Read more

By Marie Aziz-Tunde. Aboso is a mining and farming community located in the Prestea Huni Valley Municipality of the Western region. The area is enriched with...
Read more

No ban on Ghana cocoa over child labour claims — EU

NPP clashes with NDC over voter registration in Banda: ‘1 dead’