“My record will give me a second term”- Akufo-Addo

President Akufo-Addo has expressed optimism that his achievement in government will secure him a resounding victory in the 2020...
Read more

Kanye West has surprised his wife Kim Kardashian with a hologram of her late father for her 40th birthday. The...
Read more

The Wa Municipal Hospital in the Upper West Region is in dire need of blood. The facility does between three hundred to four hundred blood transfusions a month.

The only way the hospital is able to keep up with the many blood transfusions is through ‘blood replacement’ which has been described as a ‘very unhealthy situation’.

The Laboratory Manager at the Wa Municipal Hospital, Theresa Salifu, said COVID-19 has made it even more difficult for the her outfit to undertake mobile blood donation exercises to restock the blood bank at the Hospital.

The Wa Municipal Hospital serves as the biggest health facility for persons in and around Wa. The hospital is expected to have a minimum of 40 units of blood in its blood bank at all times and yet the facility currently has less than 20 units of blood.

According to Madam Salifu, the situation poses significant health risks persons who patronize the facility particularly pregnant women and children.

“Because of the COVID-19 we are not able to do a lot of mobile sessions; that is voluntary donations. We rely so much on the patient’s family to replace. Such an exercise is going to furnish our blood bank with a lot of blood which will save a lot of lives,” She said. 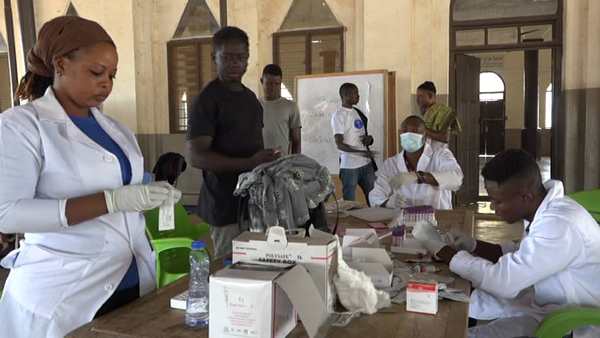 To help restock the blood bank at the Wa Municipal Hospital, Humanity First, a non-governmental organisation with representation in 53 countries conducted a blood donation exercise at Wa.

The exercise formed part of the organisation’s silver jubilee celebration. 210 units of blood were collected from the two day exercise. 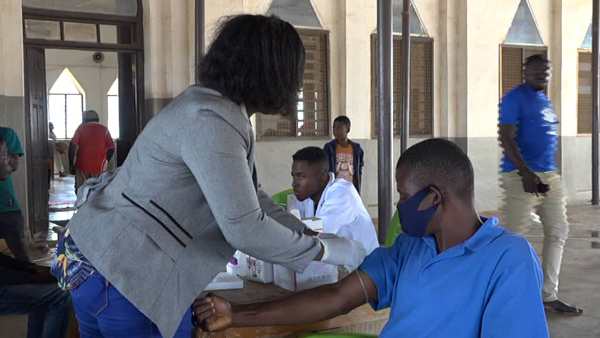 The Upper West Regional Representative of Humanity First, Mohammed Nasir Bin Salih said the units of blood collected will help save the lives of the vulnerable stressing that “one of the aims of the organisation is to maintain the dignity of human life. We think that one of the problems that is around this area is that people usually have problems with blood when they are ill. We as a charitable organisation, we decided to help the blood bank to have a lot of blood”.

“We are expecting that the blood will be given the vulnerable; people who just cannot afford it,” he said.

Mr Bin Salih said as on organisation, their objectives transcend religious, national or ethic segmentations. He added that Humanity First will continue to undertake social activities for the good of society.

A donor, Osman Sabri Froko who spoke to the GBC said as a religious person, donating blood is a call to service.

He added that the Qu’ran dictates that Muslims do their best to help those in need thus donating blood to restock the Wa Municipal Hospital Blood Bank is in line with his faith.

“My record will give me a second term”- Akufo-Addo

President Akufo-Addo has expressed optimism that his achievement in government will secure him a resounding victory in the 2020 General election. He said he came...
Read more
Entertainment

Kanye West has surprised his wife Kim Kardashian with a hologram of her late father for her 40th birthday. The reality star posted a recording...
Read more
Africa

A Kenyan judge has sentenced two men to 18 and 33 years in jail after they were convicted of helping Islamist militants attack a...
Read more
General

Two new arrests have been made in connection with the death of the former Member of Parliament (MP) for Mfantseman, Mr Ekow Quansah Hayford. This brings the...
Read more

Government is to construct 17 District Hospitals in the Greater Accra region as part of Agenda 111 to build hospitals in districts without them. The...
Read more

The Ministry of Health (MoH) has announced that it has received financial clearance to recruit 22,063 various health professionals into the public health service...
Read more

Ghanaians in Denmark & Sweden donate over 8,000 Euros towards COVID-19 fight

Ghanaians in Denmark and Sweden have donated more than 8,000 Euros to the COVID-19 Fund, to aid Ghana's fight against the coronavirus. Ghana's Ambassador...
Read more

Charge d’Affaires of the Chinese Embassy, Zhu Jing, said the COVID-19 situation would soon improve as close to nine vaccines have entered phase-three of...
Read more

Ghana’s educational policies must be insulated from politics – Prof. Kwesi...

How to whiten your teeth as shiny as pearls