The Ghana Police Service says it is adequately prepared to quell any undesirable situations in the Upper West Region before, during and after the country’s general election later this year.

The Police Service was confident because of the constant training and re-training of personnel and the availability of adequate security gear in the region.

The Inspector General of Police (IGP), James Oppong Boanuh made these comments when he spoke to the media after inspecting a riot control display by personnel of the Upper West Regional Police Command. 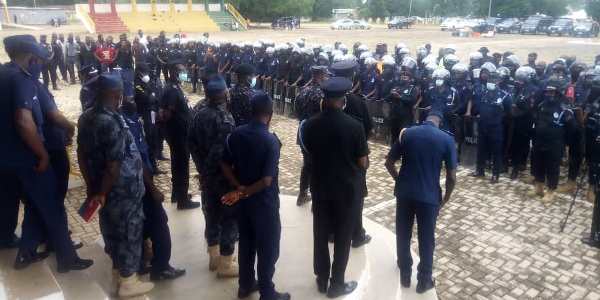 The IGP is touring Regional Police Commands in the northern Ghana to assess the level of preparedness of personnel of the service prior to the general election.

“The challenges relate to getting information to deal with the crime. The general situation is however relatively calm. The Upper West Region is a very peaceful region and I have been impressed with whatever you [police personnel] have been doing so far. No security is 100 percent, so definitely we [police administration] have a few things we are not happy with,” he said.

The IGP, James Oppong Boanuh said work on the new Regional Police Administration had begun. He hoped that when completed, the facility would enhance the work of the Police Service in the region. Mr Oppong Boanuh mentioned that the issue of inadequate personnel is a nationwide problem. The IGP said the Police Administration would continue recruitment to raise personnel numbers to reach International standards.

The IGP wrapped up his day’s tour of the region with a durbar with personnel of the Service.

A total of 31 aspirants have been vetted and cleared to contest the Northern Regional New Patriotic Party (NPP) executive positions. As at close of...
Read more

The contest for the Ashanti Regional chairmanship of the New Patriotic Party (NPP) is gaining momentum with the vetting of the five aspiring candidates. Although...
Read more

By Bright Ntramah Phase one of the Sunyani Airport has been completed and is due to be inaugurated. The second Phase which will involve expansion...
Read more

The New Patriotic Party (NPP) in the Ashanti Region has commenced internal processes for its annual delegates conference for the election of regional executives. Already,...
Read more

An Insight In Drone Technology

Calls for establishment of lab for early detection of yellow fever