President Akufo-Addo has asked his appointees to embrace the government’s tough measures to win the fight against illegal mining popularly called galamsey.

He stated at a meeting with Metropolitan, Municipal and District Chief Executives in Kumasi as part of the latest moves to find a lasting solution to the menace.

While seeking a collective support in the fight, President Akufo-Addo expressed concern that there were reports that some of the DCEs were complicit so far as illegal mining is concerned.

He said the fight against galamsey would definately count in the next general election.

President Akufo-Addo was clear about his commitment to halt all operations of galamsey, adding that he will not shield any government official found complicit in galamsey activities.

“Let us work together to get rid of this menace. I believe that if the people of Ghana see a determined effort on our part, which yields results, our water bodies are clearing, our lands are being reclaimed, and our forest zones are being preserved, it will help them enable us to break the eight”, Nana Addo maintained. 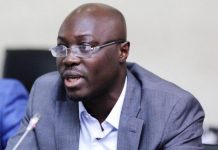