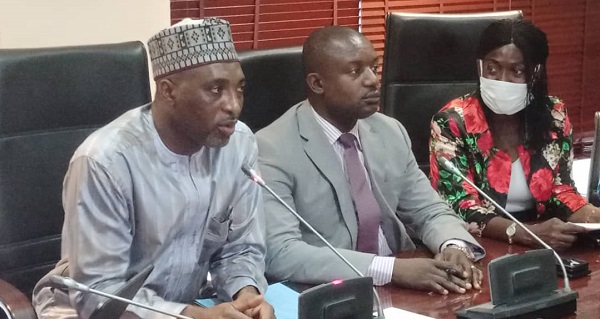 The NDC Members of Parliament on the Committee of Energy and Mines have sympathised with Ghanaians on the recent fuel price hikes and demanded scrapping of the Special Petroleum Tax and other taxes to ease pressure on petroleum products consumers.

According to them, the Special Petroleum Tax imposed on petroleum products by the government must be suspended in the 2022 budget to provide some respite for Ghanaians from what they called the agonizingly high cost of fuel at the pump.

John Abdulai Jinapor, a Ranking Member on Mines and Energy Committee at the News Conference on 26th October 2021 in Parliament noted that the demands are in line with public interest “because crude prices which was pegged at a bench-mark price of $54.75 dollar per barrel in the 2021 budget statement has risen to over $85 representing an increment of over 55%”.

He submitted that, as a net exporter of crude oil, “Ghana’s revenue receipts from petroleum exports are therefore expected to increase from the initially projected figure of $800 million to over $1.2 billion. What this means is that the nation is making huge unanticipated revenues from crude exports hence the need to abolish the Special Petroleum Tax to ameliorate the suffering of the ordinary Ghanaian”.

In making some policy proposals for government to consider, the Minority has taken “cognisance of the worsening situation and the incompetence being exhibited by this government has taken the pain to proffer some concrete and cogent suggestion as part of our responsibility to ensure that the consumer is cushioned and have some respite” in the area of one: a review of a sanitation levy of 10 pesewas per litre of fuel by resorting to the polluter pay mechanism which they said is a more pragmatic way of managing our waste.

“It is untenable to tax the ordinary fuel consumers since the consumption of the same does not contribute to the waste being generated daily.”

They also rejected the decision by President Akufo-Addo to turn the refinery into a tank farm, as they believed that with the right policies, the refinery can be turned around to fulfil the purpose for which it was built.

John Abdulai Jinapor also wants the government to reconstitute the Board of the Tema Oil Refinery and appoint a substantive Managing Director with the task of ensuring that the refinery is able to process domestic crude to its fullest capacity.

“The current state of TOR leaves much to be desired. It will be recalled that as part of efforts to revamp TOR and ensure value addition to our domestic crude, the NDC at the time procured about 2 million barrels of crude for processing by TOR.

Unfortunately, but characteristic of this administration, that parcel of crude which was procured by the NDC administration for TOR to process was sold under very opaque and bizarre circumstances. Today as a result of bad management and poor leadership, the Tema oil refinery is on the verge of collapse with the government proposing to turn it into a tank farm.”