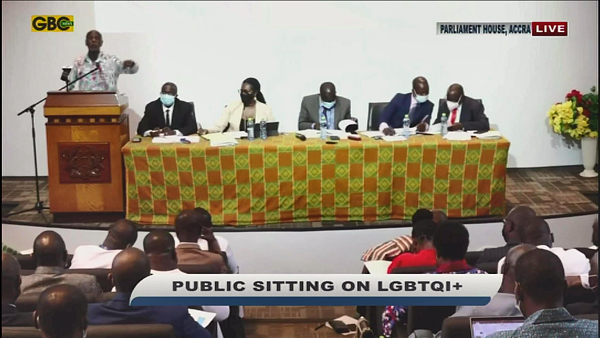 The Constitutional, Legal and Parliamentary Affairs Committee of Parliament has begun public hearings on the Promotion of Proper Human Sexual Rights and Ghanaian Family Values Bill which seeks to criminalize LGBTQI activities in Ghana.

The hearing is to seek clarification from organizations that submitted a memorandum on the introduction of the Bill to inform the Committee’s report.

Interest groups including MPs, Academia, Civil Society organizations and religious bodies were given the opportunity to express their opinion on the draft legislation.

Following the introduction of the Bill by some MPs, several arguments have been made on the subject with some arguing for the Bill, with others opposed to it.

He said the Bill clearly imposes cost and charges on the consolidated fund and should therefore not have been introduced before Parliament by a Private Members’ Bill. Mr Akoto Ampaw described as absurd the criminalisation of persons who expressed sympathy or support for the LGBTQI community.

This he said is a violation of freedom of expression and stigmatisation against persons engaging in LGBTQI. He said the Bill must be rejected by Parliament on grounds that it stokes hate, intolerance, and violence against LGBTQI activists.

In a presentation a representative of the Ghana Pentecostal and Charismatic Council, Apostle Ofori Kuragu, said the anti gay Bill conforms with the Constitution as it affirms the fundamental human rights of all Ghanaians and protects the vulnerable persons against the influence of the LGBTQI+ Community.

He said the Bill reflects the majority view of the population which in clear terms frowns on LGBTI activities and urged Parliament to consider the general mood of the citizens by passing the Bill.

The Church of Pentecost and Advocates for Christ expressed support for the passage of the Bill to uphold the Ghanaian moral values.

The Ghana Aids Commission urged Parliament to consider the challenges the Commission and other State Agencies that depend on international donor support may suffer if the Bill is passed.