The Vice Presidential candidate of the National Democratic Congress (NDC), Prof. Naana Jane Opoku Agyeman has asked Ghanaians to desist from politics of insults and intimidation since that does not bring about national development.

Addressing the chiefs and people of Suhum in the Eastern Region to round off her tour of the region, Prof Opoku Agyeman, said the country has been left behind because of the concentration on insults and fights coupled with divisiveness which have deprived the nation of development.

She said the NDC government has proven to be one that delivers on it’s promises and urged Ghanaians to vote massively for its Flagbearer John Mahama to continue with his development projects.

National Chairman of the NDC, Samuel Ofosu Ampofo, said it is surprising to see that after the NPP pride itself as being competent, Nana Akufo Addo has nothing to show for his four year in office and is now going round cutting sod for project commencement two months to elections.

He called on the people to demand to know the contractors for such projects and whether or not these projects were  included in the 2020 budget if not, all the projects are what he termed 419.

The Chief of Suhum, Osabarimah Ayeh Kofi I, reminded the NDC to concentrate on voters who are discerning and vote based on issues and what the party has done or will do if voted into power.

Prof Agyemang also went to Akrabo, Coaltar, Adeiso and Nsawam where she was met by enthusiastic crowd who were waiting in the rain. 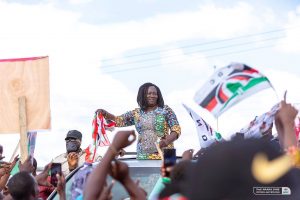