The Minority in Parliament has raised concerns about what it says is the intensive exploitation of COVID-19 through screening...
Read more

A total of 7,969,807 prospective voters were able to verify and authenticate their details during the just-ended 10-day Voters Register exhibition held at the 33,367 centres nationwide.

The figure represents 46.9% of the total number of people whose names were on the provisional register.

The Chairperson of the Electoral Commission (EC), Mrs Jean Mensa, who announced this at the ‘Let the Citizen Know’ media briefing in Accra said the exercise was successful.

She explained that the short message service introduced by the Commission recorded 698,404 prospective voters verifying and authenticating their data in the register.

Mrs Mensa said a total of 7,969,807 prospective voters verified their names at the exhibition centres.

Comparing a similar exercise that preceded the last general elections, she said the turnout rate for the 2016 exhibition, which lasted for 21-days was 46.5% while the recent 10-day exercise recorded a turnout rate of 46.9%.

The EC Chairperson said just as expected there were concerns raised during the exercise, and that the essence of the exercise was to allow prospective voters to check their details, including their names, sex, age and pictures.

She said the Commission was competent and could fix all the challenges, explaining that “The information technology systems are robust. The issues that came up were as a result of administrative and human errors and they are been corrected.”

Mrs Mensa said the electoral processes were as ‘open as day and transparent as the sun’ and could not be said to be flawed.

“The Electoral Commission officials cannot add even a single vote or take a vote to any political party. Stakeholders are carried along throughout the process so there is no room to rig elections,” she said.

She said the Commission had no intention to disenfranchise any citizen or group of persons and that challenges that occurred during the exhibition of the voters’ register were widespread and not limited to a particular location.

Mrs Mensa said it was important for the stakeholders, especially the political parties, to draw the attention of the EC to issues that might arise for the Commission to address them.

She said the Information Technology officials of the Commission were working assiduously to correct anomalies in the provisional register. 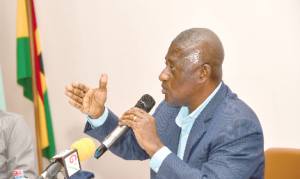 The Deputy Chairman in charge of Operations, Mr Samuel Tettey, said the certified final copy of the voters’ register would be ready on November 11, and presented to the political parties.

He appealed to persons, who could not participate in the previous registration exercise to do so when the Commission re-open the exercise on October 1.

The Minority in Parliament has raised concerns about what it says is the intensive exploitation of COVID-19 through screening of people arriving in the...
Read more
Research | Discovery

Overuse of antibiotics over decades has resulted in a hoard of antibiotic-resistant bacteria; these could be responsible for up to 10 million deaths a...
Read more
Business

Seven communities in the Adansi North District will soon be connected to the national electricity grid. The project is part of the $ 103 million...
Read more

The Police Management Board led by Inspector General of Police, Mr James Oppong Boanuh, has commiserated with former President Jerry John Rawlings and his...
Read more

The Minority in Parliament has raised concerns about what it says is the intensive exploitation of COVID-19 through screening of people arriving in the...
Read more

The Minority Caucus of Parliament led by Haruna Iddrisu has raised an alarm over what they called a “conflict of interest ” involving the...
Read more