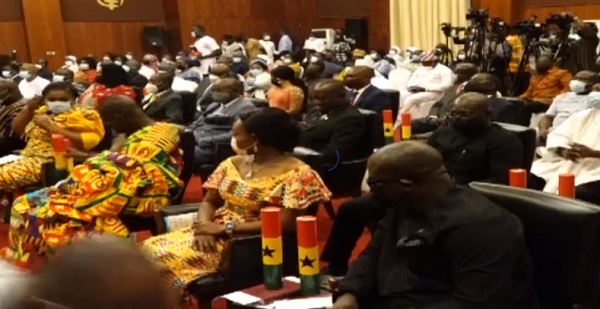 President Akufo-Addo has warned deputy Ministers in his administration that he will not countenance any act of subversion or disloyalty to their Ministers.

He said such act will not be treated kindly as it will lead to the deputy Minister in question losing the job.

President Akufo-Addo gave the warning when he swore into 39 deputy Ministers and a Minister of State at the Banquet Hall of the Jubilee House. He asked them to file their assets declaration promptly and live above reproach.

The swearing in of the 39 deputy Ministers and a Minister of State signals the completion of the composition of the members of the Central government in President Akufo-Addo’s second term. This brings to 86, the number of Ministers and deputies.

President Akufo-Addo asked them to justify their selection as there are many peers who did not get the nod.

He tasked the appointees to bring their expertise to bear in steering Ghana out of the devastating effects of the Coronavirus. The President expects nothing but loyalty of the deputies to the Minister.

President Akufo-Addo reminded his appointees of the pledge the NPP government has made to serve the citizenry honestly and competently tasking them to provide public service.

He advised them to file their assets declaration promptly.